Jemima Sumgong, the winner of the Rio Olympics women’s marathon, did something unusual for a Kenyan woman: she didn’t move her torso side-to-side much. It appeared as if her sides from armpits to hips stayed basically the same length throughout her gait cycle.

Her arm movement also looked increasingly unusal as she grew more fatigued. Her elbows were bent the normal amount, keeping her hands moving around heart height or higher, but they cut a swath through the air some distance out from her torso. 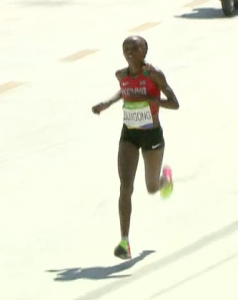 Reviewing the highlights video later clarified what she was doing: her torso was slightly flexed, or bent forward. This is a separate thing from her forward lean, which is done by just tilting the spine forward without bending it.

Sumgong had actually bent forward slightly, compressing her chest and abdomen a bit and lengthening her back. I wrote about this movement pattern in my analysis of the Great Edinburgh Cross Country in January.

Doing this interferes with the counterrotation of upper and lower body, as I explained in my analysis of Galen Rupp’s form in the men’s marathon. Muscles busy doing one thing can’t do another, so abdominal muscles busy flexing the torso can’t also facilitate the counterrotation, and in fact oppose it.

The most telling characteristic of Sumgong’s running style was how at the end of the backswing of each arm, the hand was farther out to the side than her elbow. This exaggerated external rotation in the shoulder joint and movement of the shoulder girdle is a result of how far out her arms are moving from her body, which is a result of her trunk flexion. If Sumgong were to reduce the contraction of her abdominals that extra movement of her arms would immediately and spontaneously downregulate to look more like Kirwa, the silver medalist in the race. 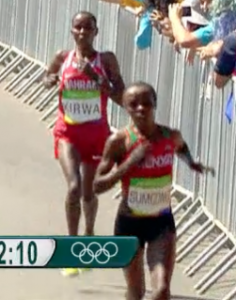 Look at the contrasting organization of Sumgong and Kirwa’s trunks. You can see that the base of Sumgong’s neck is pulled forward and down while Kirwa appears much more erect (not to be confused with upright, as she is leaning forward). Kirwa’s arms are closer to her body, Sumgong’s wider.

Bronze medalist Mare Dibaba also keeps her arms close and high. The organization of her feet and legs should create extra braking force but I don’t see it in her running. She looks quite smooth. I feel there’s something I’m missing about how she runs, but I’ll have to wait till I see someone else running similarly before I’m likely to have insight.

The American women I saw most of in the race–Shalane Flanagan and Desi Linden–also ran true to their habitual styles. Flanagan was alas, as always, working too hard, with arms moving fairly sagittally, fists too far forward of her torso, ankles too flexed, and a heavy landing with every stride.

I loved her form on the track, but have always wished on the roads that she could relax her hands and feet, bring her arms in close to her and let her torso move more. I think it would have made a difference.

Desi Linden shows her usual gliding form, trunk flexed a bit like Sumgong but with hands lower, more around her pelvis, and footfalls in line with each other, as if on a tightrope. Lengthening her torso a bit, bending her elbows more, and keeping her feet under her hip joints would be faster for her but like Meb Keflizhigi her pelvis movement (facilitated by having her hands so low) gives her a smooth gait that doesn’t seem to overly stress her body.