In my analysis of the Olympic men’s 10,000 I wrote how Galen Rupp’s technique reminded me in some ways of Usain Bolt’s, with his use of the frontal plane (side-to-side motion, basically) more than rotation. In this race it became evident he also has this in common with Eliud Kipchoge, the winner.

Like Bolt, Kipchoge uses more rotation than Rupp but the basic form is really similar. Some people call it a track runner’s style, though plenty of (successful) track runners move in other ways entirely. 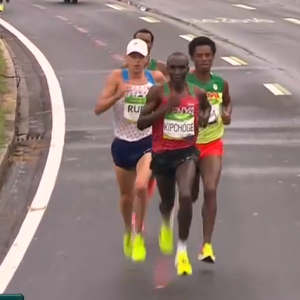 Notice Kipchoge and Lilesa’s chests turned more than Rupp’s. Rupp’s shoulders are lifted. Also notice Lilesa prepared to land on the outside of his foot due to more rotation of thorax and pelvis.

These guys work with a contained forward lean and are forward on their feet, with their heels barely coming down to the ground. Runners who use more rotation tend to land with flatter feet or even, if their shoes are more cushioned, appear to gently heelstrike. You can see this in the silver medallist, Feyisa Lilesa, who uses much more rotation.

Through the race Rupp, though running well with thoroughly planned tactics that even included regular hat changes at water stations, seemed to be hampered by his lack of rotation and difficulty breathing. His lower ribs were visibly pushed backwards by compression in the front, you could see them in the armholes of his vest.

As a consequence his shoulders were more lifted than the runners around him, and appeared to move somewhat independently of his ribcage as he ran. This happened because his ribcage wasn’t turning enough to allow the necessary movement of his arms, so the arms/shoulders had to do some independent movement. 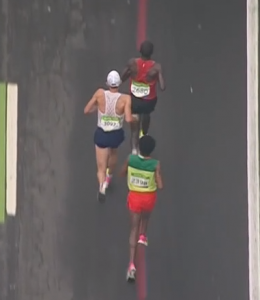 Notice Kipchoge and Lilesa turning upper bodies right–Lilesa more–race numbers aligned with left legs. Rupp’s number stays in the middle, as does the center of his upper back.

Muscles busy doing one thing can’t do another. Obliques busy co-contracting to hold the lower ribs down in the front can’t also work in rhythmic alternation to create counter-rotation of the thorax and pelvis.

They also can’t easily expand to allow the downward movement of the diaphragm necessary for good breathing. A well-coordinated counterrotation in the lower thoracic spine facilitates expansive breathing. You can see this in one of the many close-up slow-mo sections of the race video (whenever it gets posted to YouTube). A close-up of Kipchoge’s face shows it relaxed, a gentle bounce to the cheeks and jaw as would be expected, and no struggle to breathe. A close-up of Rupp’s upper body and face shows a mouth open to drag air in and considerable tension in his chest and ribs.

I realize this pattern happens often with asthma. However as is so often the case, it is exactly the opposite of what a person with trouble breathing should do. I know from my own practice that clients with asthma breathe better when they learn to counter-rotate better and thus reduce the tension in their upper abdomen and ribcage, allowing the diaphragm to work better.

Anyway, hats off to Rupp, so to speak, who ran an amazing race regardless. And to powerhouse Kipchoge who includes the asset of excellent technique in the formidable array that makes him such an accomplished runner. And, in fact, to many runners with remarkable performances, including (as I show my US/UK bias) Jared Ward and Callum Hawkins, both running with really nice technique! And, finally, to Feyisa Lelisa, whose bravery extended way beyond the confines of the race.

Do you have a video that illustrates what you are saying?
Thanks!

Hi Clint, I wish I did! Normally I can find something on YouTube but TV/video rights are monitored really tightly during the Olympics and I couldn’t find anything at all. I was watching from Germany but if you’re in a different country you won’t be able to watch the clips I link to here, and NBC will not let me see the US broadcast footage. So all I’ve got are screenshots, I’ve chosen a few for this post that I thought were particularly good illustrations. My advice is to go wherever you can online (NBC if you’re in the US, I imagine) and watch a highlights video of the race, you should see what I’m talking about. Eventually you’ll be able to go to YouTube.