Sometimes I watch a runner win a race and think, “I don’t know how that person is running that fast with that form.” Other times I think, “Ah, that person ran so fast, but just imagine if they sorted out that one technical problem, how much better they would be.” I didn’t think either of those things watching Vivian Cheruiyot’s Olympic record 5000 win. She brings every aspect of good technique together into a perfect quicksilver gait. I know exactly how she runs that fast. 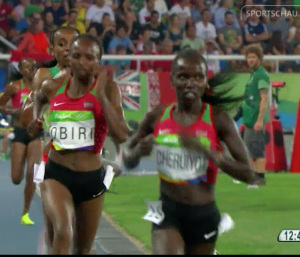 Her form gave her some specific advantages over Hellen Onsando Obiri and Almaz Ayana, who won silver and bronze respectively. In this picture you can see that Cheruiyot and Obiri are doing completely different things with their arms and upper bodies — as different as cartwheels are from somersaults. It’s practically a different gait.

Notice how close Cheruiyot’s hands are to her collarbones even though she is near toe-off. You can see that Obiri is in the same part of her gait cycle but has her back hand lower than Cheruiyot.

Cheruiyot’s high hand carriage, done right, is a bit faster. I believe this is because it raises the center of gravity and makes a runner more unstable—that is, easier to move. The right kind of instability should be the holy grail for runners.

Also, for reasons I’m sure some physicist can explain, the area of the trunk that the hands move around is more mobile than the areas above and below it. Moving the hands around the heart and lower ribs like Obiri helps facilitate the counterrotation of upper body and lower body, since the hands are moving around the area that happens. But moving the hands around the upper thoracic spine, almost to the base of the neck, like Cheruiyot, makes it easier to move the head into alignment with each foot coming into stance, and that causes the whole spine to move better. In my experience, the higher up in the body a runner makes a refinement to their technique, the bigger the effect, and a movement that helps the head move better has quite a significant effect indeed. 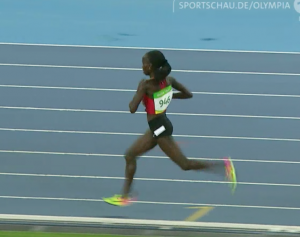 Also notice how much Cheruiyot turns her upper body. It’s a huge movement. The picture is from the side and slightly behind, and you can actually read the race number on her back! At the speed she’s going this makes for a large stride length, further facilitating speed.

Obiri by contrast pumps her arms up and down almost like a sprinter, in more or less the sagittal (front-to-back) plane of motion, and if you go find a race highlights video from the Olympics broadcaster or news outlet in your region of the world you’ll see that she is working considerably harder than Cheruiyot. More vertical oscillation, more of a jolt with every footfall. This is the kind of technical difference that can determine the outcome of a race. 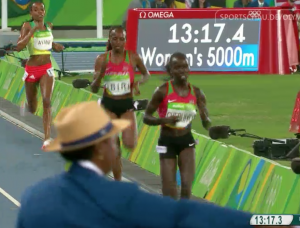 Notice how Obiri’s right hand is in front of her right shoulder rather than the center of her chest. Also notice how Ayana appears almost to be leaning backwards from the waist.

In my analysis of the women’s 10,000 I pointed out the difference between how Cheruiyot and Ayana hold their heads. In the 10,000 Ayana had the strength to overcome her less efficient head position and arched back by turning her upper body a lot and stretching out her stride. Perhaps due to fatigue, she is unable to control these troublesome elements of her form in this race, and in video you’ll note the prancing quality in her gait in the final laps, a phenomenon that occurs often when the pelvis is tilted forward but the head is pulled back. People just learning to run barefoot may recognize this feeling.

It’s worth noting that while Ayana held her form together to win the 10,000, it takes a lot of work to do that and thus fatigue has a double consequence for her — slower running and her form falling apart. Cheruiyot ran with the same excellent form in both races. I’m pretty sure that in general, no matter how tired Cheruiyot was, the basic elements of her technique that I’ve described would stay the same. So fatigue has only one consequence for her, it just means slower.

This, in a nutshell, is why running form/technique has to be approached as a motor learning issue rather than a strength issue. Rule of thumb: if you have to increase your strength to hold your form together, you haven’t improved your form.

In any case, if you haven’t seen video of this race, go find some. Eventually it’ll be on YouTube but at the moment it’s all still under the control of national media outlets, so look there and see what you might be able to learn from Vivian Cheriuyot.