Everyone wants to know how Ethiopian Almaz Ayana’s amazing world record run was possible. I can’t tell you that from looking at her technique–as always, running technique is just one of the elements of performance. However a close look at her technique does reveal a way she could actually be faster.

Dibaba too, along with many others in the field.

The race coverage I was watching switched to slow-mo just before the end, showing Ayana’s upper body and head. The commentator noted she looked very relaxed, and while it was true that she wasn’t grimacing with effort, she looked anything but relaxed to me. Her head was jolted with every step.

This phenomenon occurs when the head is too far back relative to the pelvis. There are two ways you can think about it:

a.) The spine is a bit hyperextended, so each time the runner extends her leg and hip, her spine also extends further, pushing her chest forward and head backwards.

b). The head is behind the line of force from foot into torso in late stance, and thus is momentarily left behind each time the runner pushes herself into flight. 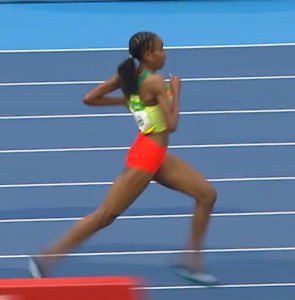 Also, just to be crystal clear, technically the head isn’t actually pushed backwards unless the runner is on a treadmill and thus not moving forwards. When running on solid ground, the head is simply accelerating and decelerating–its relationship with the pelvis oscillating forward and back–rather than moving steadily forward. Not many runners at an elite level do this, as it’s more work than positioning the head far enough forward to maintain a relatively constant speed.

However when a camera keeps pace with a runner the head appears to be moving backwards and forwards, so for convenience I’ll talk about it that way.

Her head carriage thus results in extra effort of two kinds: an inefficient head position to begin with, plus extra effort to grip the her neck and upper body to keep her head nearly steady instead of accelerating and decelrating with every step. 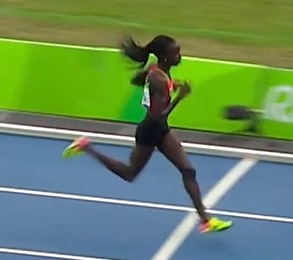 Compare this with the runner up, Vivian Cheruiyot. Her head is farther forward relative to her pelvis and it moves steadily forward. One of the effects of this is that her back seems less arched than either Ayana in front of her or Tirunesh Dibaba behind her, as well as many other women in the race.

One often hears about the running technique “fault” of an anteriorly tilted pelvis–that is, a pelvis tilted forward, thus causing the spine to hyperextend. If it’s a fault, every runner should hope to have it since it seems to be a requirement for competing in a distance event at the Olympics! I could not find a single woman in this race whose pelvis wasn’t anteriorly tilted relative to the ground.

In fact, an anteriorly tilted pelvis is required for running at speeds like this, because without it the limit of hip extension won’t allow a large enough stride length. It’s also a darn good idea at slower speeds.

What causes an anteriorly tilted pelvis to result in a hyperextended (arched) back is the head position. We should not look at the orientation of the pelvis relative to the ground, but relative to the head. When the head is too far back, the back is arched. To fix it, move the head forward. Then enjoy running faster and feeling more comfortable. 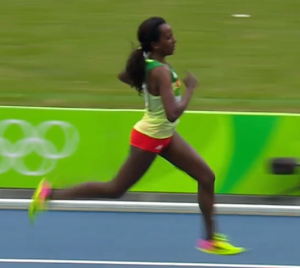 This brings us to Tirunesh Dibaba. Her head is also far enough back to make her back appear hyperextended. This is characteristic for her. She holds her head and neck as if she were walking or standing upright, and yet it appears to glide forward smoothly, not bobbing like Farah’s or tensed like Ayana’s.

To accomplish this she’s doing something Ayana is not: using her arms to facilitate lateral movement of her upper spine. This positions her head well relative to each foot in turn, moving it side to side as necessary, and this helps to maintain a steady forward motion.

Ayana, by contrast, primarily rotates her upper body, the size of the movment is quite striking in the final laps of the race. This lengthens her stride but does nothing to reduce her neck or shoulder tension. Compare the elbow position of the two women; Ayana’s are much farther out than Dibaba’s.

(A side matter: I have a hunch that broad shoulders are good for speed, generating a long stride and a lot of force when the upper body is rotated powerfully.)

Both of these women could reduce their effort by moving their heads farther forward; Ayana could further reduce hers by learning to incorporate some of that serpentine sideways movement so many of her countrywomen including Dibaba have mastered.

Is it crazy to talk about how these two runners, with their dazzling accomplishments, could run more economically? I don’t think so. No matter what level they’re competing at, every runner is in a private race, seeking to realize their potential for speed, skill, pleasure… the goal is personal. Where they rank against others is irrelevant in this competition with self.

The Olympics are meant to remind us of this. Each race has more than one winner, it’s full of victories ranging from the deeply personal to the public. And, turning that around, as we know from the sad history of doping and its massive immediate reality, not all runners in the Olympics are winning this most important race within themselves.

My professional expertise is only about the most important race: how can each runner be the best they can be. That’s the Olympics I’m watching. And I wonder what would happen if Dibaba and Ayana took that extra work they’re doing to control their heads and put it into speed instead.

Thank you,Jae. As always my husband and I look forward to you special event analysis of gait. It has made us so much more aware of what to look for in the elite runner’s style that could make them even more economical and efficient!
Cheers, Sue.

What may be efficient for you might not be efficient for another.Personally adopting or changing one’s form may even cause injury. Every great runner has some flaw in running form but it doesnt mean thst it slowed them one bit even as thry set world records.

Excellent job of summarizing the thinking I founded my business to counteract, Joe. Sounds like you haven’t read much on my website. Take a look around! You can start with this post: https://www.balancedrunner.com/jae-gruenkes-elite-running-form-analyses-what-you-need-to-know/

Previous Post How to Run Slowly with Good Technique (for MAF or recovery) Next Post Rio Olympics 2016 Men’s 10,000 Running Technique Analysis–Farah and Rupp