The men’s and women’s 10,000 meters races this weekend each kept the focus primarily on one runner. In the men’s it was Mo Farah in his final 10k on the track, and in the women’s it was Almaz Ayana blowing everyone else away. My analyses are consequently focused on these two extraordinary runners.

When Mo Farah was warming up for the race one of the BBC commentators pointed out that it’s easy to pick him out of a crowd because his running style is so distinctive.

We’ve all had plenty of opportunity to watch him run, and can pick him easily out of a crowd by now as well. But still, over the past few months and in watching this race, two things became much clearer to me about how he runs.

This is the key thing we all know about Mo: his head bobs around more than just about anybody else’s. In the past I’ve said that was because his head is behind the line of force from his foot, so it gets pushed backwards as he approaches toe-off.

It was clear to me watching the World Championships 10,000 that he’s doing this from his neck.  His head isn’t being positioned where it is relative to his pelvis and feet due to what’s going on anywhere else in his body. He’s actually contracting the muscles in his neck to pull his head back and limit movement in the top few cervical vertebrae.

Which actually means is that his head isn’t only bobbing because it’s being momentarily left behind every time he pushes the ground away.  It’s actually showing the movement of the middle of his spine, where he moves freely and a lot in order to generate his massive stride length.

If a runner’s spine is free from chronic, habitual muscular contractions throughout its length, the head is positioned so there’s a single line from the pelvis through the front half of the top of the head, on a forward angle to the ground that’s appropriate to the speed (and terrain). The face is oriented forward, not down or up, meaning that the skull slides forward on the atlas vertebra.

And then as the runner’s pelvis and upper body turn and tilt side to side, the movement is dispersed through each of the thoracic and cervical vertebrae to modulate the movement of the head so it bobs just the right amount side to side to line up over each stance foot in turn.

Because Mo stiffens his neck and pulls his head back but otherwise moves quite a lot, the movement throws his head around. And in fact he may be using his head to get leverage on his legs, increasing the tension there to direct force into his spine and pelvis, increasing the range of motion of his legs and also the amount of force he puts into the ground.

That’s always been my gut feeling watching Mo, that he’s actually pumping with his head as well as his arms. I reflected on this possibility in my analysis from Rio but only in the sagittal plane, with the pulling back of the head part of an effort to use the muscles on the back of the body better. But in this race it looked like it worked in other planes of movement too.

I realized a few months ago that the extra push that moves his leading leg farther forward than one expects without overstriding is actually a movement of his pelvis. It’s hard to see because his vest and shorts tend to hang loose around his hips. But that big head movement that only gets bigger as he stretches out at the end of a race doesn’t lie about what’s happening from about the 5th thoracic vertebra downwards.

If you watch the race video you can see the race number on his hip flapping around more than anybody else’s, especially in the diagonal view from behind and a little to the side. Now of course practically every runner has their number in a slightly different place, and their shorts are cut differently as well, so this isn’t terribly scientific, but Mo’s number is too high to be reflecting leg movement—it’s pelvis movement it shows. And it moves like crazy.

That is the secret to increasing your stride length, and the secret as well to finding another gear late in a race: let your spine move a lot. So often runners trying to improve work on the opposite: core stability so their legs work more. But if you stop stabilizing and put all your energy into movement–even in your torso–you unleash your legs and some extra energy at the same time.

Last year I wrote about Almaz Ayana’s 10,000 victory in Rio. She’s still running just the same, albeit her shoulders look more relaxed. However since this has been the “Year of The Right-Side-Short Asymmetry” for me, in which I see the same right-side asymmetry everywhere I look, I found myself focusing on a detail I’d decided not to dwell on a year ago.

Quirks That Add Up 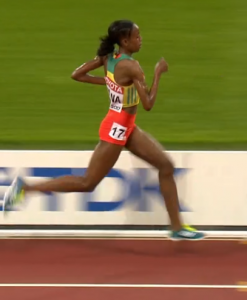 The detail is this: Ayana bends her right wrist downwards (ulnar deviation), holding it that way throughout her gait cycle.  Up close one gets the feeling her arms aren’t working the same, but when the camera pulls back a look at her shoulders shows symmetrical upper body movement. It appears her right arm moves a more than the left in the shoulder joint, however, as it comes much higher.

Holding the hand like this means you cannot as effectively use your back muscles on the diagonal from right shoulder to left buttock. However Ayana’s emphasis on rotation of the upper body over any other kind of movement makes this less significant, and the adjustment of using a larger right arm movement should make the force going to her legs fairly symmetrical. 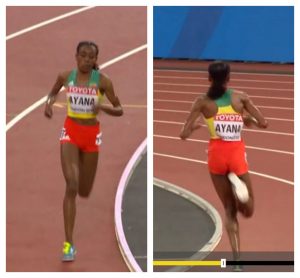 The nature of the race is such that you rarely get a view of her from the front for more than a second, so it took me awhile to notice that her right foot also turns out surprisingly much for legs which seem to work pretty evenly as well. It’s normal—part of the right-side-short asymmetry, in fact—for the right foot to turn out more than the left, but the difference in Ayana’s feet is really striking.

Her right knee is a bit adducted relative to the left and I have a sense that she brakes ever so slightly with her right foot.

Altogether this becomes a picture of a right side that has more parasitic muscular contraction than the left and doesn’t support force well through her skeleton. Except as she runs she manages to move amazingly symmetrically—more so than practically any other runner in the field.  Though she shows these pronounced asymmetrical signs at her extremeties on the right, her torso appears to work entirely symmetrically. This is something I’ve never seen before, and I look forward to my next opportunity to study her form.

Mo’s head and upper body bubbling seams like the same movement we see in Cyclists. It might be the product of him bending his legs more than the other athletes to generate more force.

Both Mo and Ayana have that short right-side asymmetry. Ayana has already suffered injuries this year, but I don’t know how Mo has been almost injury free since he started dominating.

Last thing … Ayana has the least forward lean. She also doesn’t seam to bend forward from the hips, but It looks like she’s more relaxed in her running style than the other athletes, so I wonder if that’s how the upper body should be positioned compared to say Edna Kiplagat or Bekele.