I eagerly watched the World Championships marathons earlier in August, taking some notes and several hundred screenshots, but then wasn’t able to get blog posts together before heading out on a family camping trip. However, even though analyses of these races may not necessarily be timely there were still a couple of extremely interesting things to see in the women’s race.

As you may have heard, Rose Chelimo won the race, Edna Kiplagat took silver, and Amy Cragg took bronze. Those three places are normally all I can talk about but happily since a very large lead pack ran together for the majority of the race, an unusually high number of runners were in camera view.

Here’s a highlights video, unfortunately with only the top four finishers:

Like a lot of Americans I was excited to see Cragg run so well–she fought fiercely for third place. Her form has looked pretty smooth to me over the years, as her pelvis tips easily side to side in the frontal plane. However the contrast between her and the other top finishers was pronounced, with Cragg running fairly upright while the others leaned forward. 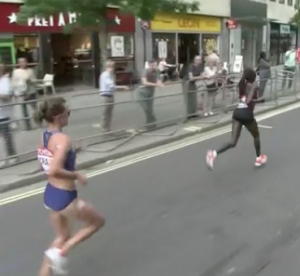 You can always see the truth about a runner’s form on the other side of the finish line (or when a runner stops for any reason). Chelimo and Kiplagat just slowed and stopped, but Cragg buckled to the ground as her pelvis stopped moving forward while still behind her feet. This isn’t just because she was more tired than the other two, it shows that her pelvis had been a bit too far back while she was still running, placing a huge demand on her quads.

Compared with Kiplagat I could distinctly see a lifting action in her legs as they come forward (though it’s tough to pick up in screenshots). That, as well as her upright torso, create extra work for the quads while underusing the hamstrings. 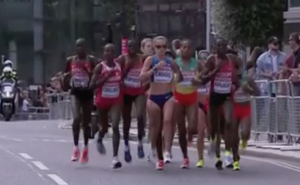 People talk about a runner being quad dominant vs. hamstring dominant with the implication that this is a pattern of running that comes from the muscles. But actually it results from where a runner’s weight is, and that’s what needs to shift to relieve overworked quads.

The bend of Cragg’s wrists and what look like open hands near the finish line also suggest she’s aiming for more of a front-to-back arm action than the two women in front of her. If so, that’s also resulting in increased quad stress as it reduces the movement of the torso that helps position the weight correctly over the stance leg.

I would be so happy to see Cragg run even a little faster without having to dig so deep. Step one would just be to do a little less work when tired–stop aiming for things like front-to-back arms and knee lift and instead let instict take over. Her pelvis and head movement suggest to me that her instinct will be good.

I won’t spend a lot of time talking about Chelimo and Kiplagat here. I’ve written so many times about the latter–most recently this year’s Boston marathon–and her form is very consistent. And Chelimo’s form is remarkably similar, as these three screenshots suggest. 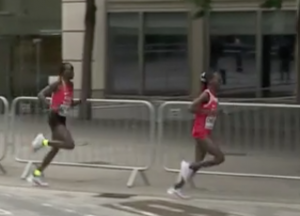 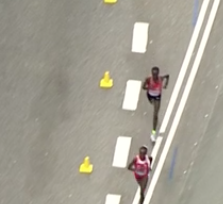 As I recall there was a difference in leg use between the two, but the replay video and my screenshots don’t give me enough info to comment on it, and I’m afraid this long after the race my memory isn’t clear enough. So that will have to wait for a future race.

Two other very interesting runners to watch were Ally Dixon of the UK and Mao Kiyota of Japan. Dixon led the race for quite a while in the middle, and there was ample opportunity to watch her form. The commentators (including Paula Radcliffe) mentioned that she works on it and on her strength but that these things are difficult to change.

As you’ll see here, she has quite an upright organization, with knees that angle in nearly to her midline and feet that swing wide. (In the first picture she’s the second runner.) 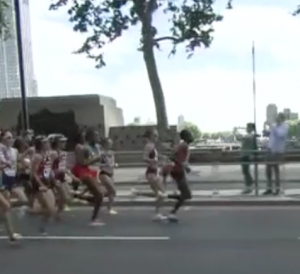 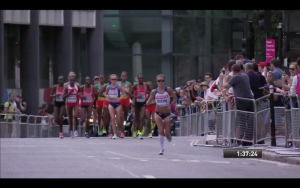 The nervous system is always trying to support the body so we don’t fall. That’s imperative number one when running. So your legs will go to where your weight is, and if your weight doesn’t shift side-to-side enough over your feet then your knees will come inwards in an effort to get under your center of gravity.

So the hip strengthing that people often do for this sort of situation–single leg squats, for example–is a pretty sensible approach since it tends to encourage the pelvis to tilt appropriately and the head to move side to side over the feet.

The core strengthening people often do for this is often counterproductive, as it generally focuses on reducing movement of the pelvis, further limiting weight shift and demanding the knees turn inward.

However in Dixon’s case it’s striking how active her peroneal muscles are as her legs swing through, when the feet should be relaxed. Strong inversion of the feet during the swing phase drives the knee inward, just as we see happening here.

So instead of working on her gait from the core/hips (which she’s probably already doing anyway) it would make more sense to learn how to let go of that extra peroneal tension and allow the rest to change in response. Better support and leverage from her legs would translate into performance that matches her determination.

Here I have to add a word about it being difficult and/or risky to change your form. It is both those things if you try to impose a new way of moving on top of the movement habits you have. However it’s neither difficult nor risky if instead you use a low-stress, exploratory process to reduce excess tension. The Feldenkrais Method®–my tool of choice–is one of the leading neuroplastic methods and makes this kind of change possible.

There’s just one more runner in this race I want to discuss, but I need to start by telling you a story. Recently a friend told me her brother is running with his arms dangling down straight at his sides because his personal trainer told him that was the right way to run, that using your arms wastes energy. She said she didn’t think it looked right, and wanted to know if there was any way it could be correct.

I said she should tell her brother to get a new trainer who knows at least a little bit about running, or who had ever watched a race and observed that everyone swings their arms, including the elites. 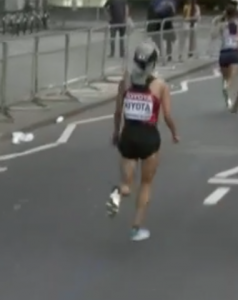 Then I watched this race, and in it I saw Mao Kiyota of Japan run nearly the entire thing with straight arms, finishing in 16th place. Which just goes to show if you train hard enough, anything is possible. (You can see her at the back of the pack below.)

Now I say nearly the entire race because the last time the camera caught her, her elbows were distinctly bent. She was growing too fatigued to sustain the effort of straightening her elbows though she was probably unaware of that fact.

16th isn’t bad. But what if she had bent her elbows more than 90 degrees rather than working the entire race to keep them straight. What would having that additional energy have meant for her performance?!

I can’t imagine what kind of argument her coach makes for why straight arms are better, but even the simplest consideration of pendulums–the longer they are, the slower they swing–ought to prevent anyone from making that mistake.

Then again, there’s also this guy, and judging from the YouTube comments plenty of people like the way his style of running feels and think his argument makes sense.

If more people followed that rule of thumb in running and coaching runners, it would be a good thing.

I talked about all of this more on Facebook Live and demonstrated some of the things I was talking about. Here’s the replay:

Thank you, Jae, for this excellent post! I found it very interesting and relevant to me as I tend to run from my quads and I have stringy hamstrings. Now I know what to look at to improve this imbalance and hopefully recruit my hamstrings more.
Cheers, Sue.

The second photo was taken with a wide-angle lens. That makes Cragg appear more upright and exaggerates the other runner’s forward lean. If you look at the vertical lines in the background, assuming the buildings are built vertical, you can see the lens artifact clearly, with the buildings on the left appearing to lean left and the buildings on the right appearing to lean right. The wider the angle of the lens, the worse the artifacts. It’s always more accurate to compare two objects when they’re in the middle of the frame, even though that means using two photos.

Thanks for catching that, Gordon. All the pics I use are screenshots of the live broadcast, so they must have switched to a wide angle lens on the TV camera. I’ll swap that photo out for another I have that’s straight from the side, Cragg mixed in with other runners–no lens artifact and still a very clear contrast in running form. I write about what I see throughout the race and try to take enough screenshots so that later I can find clear and honest illustrations for what I’m saying, but obviously there are limitations on the quality of the images I’m working with.

For some insight into the reasoning behind the straight arms strategy adopted by some Japanese runners, see https://japanrunningnews.blogspot.com/2017/08/ninja-runner-yuka-ando-leads-japanese.html.

Thanks so much, Torkel! That backstory is very helpful to know. There’s an awful lot more that could be said about it, and I may give in to the temptation to make that my blog topic for the coming week, but the bottom line is still my rule of thumb that I gave at the end of my blog post.

Some of my observations:

Dixon : She has a bad lower back arch. You can see from the side and from behind that her butt sticks out. She has low range of motion but very faste cadence.

Chelimo : She rotates more to her left side than to her right side. Her knees internally rotate too much for me. She might be one of those elites that only have 1-3 great years and then get injured all the time. We’ll see.

Craigg : I didn’t think her forward lean was as bad as you thought. It’s not as pronounced as the other athletes , but she still has a low degree forward lean. The only problem I saw is that she’s working too hard with her arm swing, wasting energy.

Please make videos to explain visually what you post. Even though I’m getting used to your explanations, it was hard at the beginning.

Thanks Nadir! Unfortunately I’m geographically blocked from that video, it won’t play for me, however it should help folks in North America who want to watch the replay.

As for video, that’s why I’m doing a Facebook Live to talk about it in just over an hour. See you there?

I watched your video on facebook (not live). Thanks so much, I understand better.

For the full race, you can install an Add-on to your Browser to change countries. The one that worked for me is called Hola.