Today I have just a few thoughts for you about the running form in the elite field in the 2018 Chicago marathon. Mo Farah’s form showed a few interesting changes from past races, Brigid Kosgei’s form is definitely worth a look…and adopting it would make a real difference for Gwen Jorgensen.

Footage of the race is currently scarce on the internet. The best thing I could find that included Kosgei is this recap video from Runners’ World–and that’s not saying much! NBC must have been very stingy about sharing their broadcast footage.

You can see Mo Farah cross the finish line at the beginning but all you see is him celebrating and doing the “Mobot.” There’s a more informative clip at 0:32–look for him in the green armwarmers.

You can see women’s winner Brigid Kosgei crossing the finish line at 1:58, and even with the tape blocking the view you can see she’s moving well.

I’ve written about Farah’s form so extensively before that there’s no point going over the basics again. What was different this time is that I didn’t see any of the forwards-and-backwards head bobbing that’s his trademark on the track and has in the past carried over in some extent to the marathon.

I also didn’t have the sense that he was pushing his hips forward with each toe-off–part of the cause of his head bobbing– or trying to open or lift his chest.

Whether this represents a maturing of his marathon form or different input from his new coach I don’t know, but these changes are certainly positive ones, saving energy. 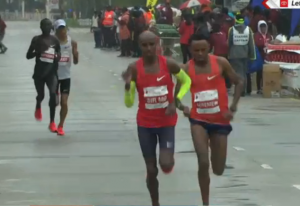 On the other hand, his hands looked wider apart than is optimal, knuckles stopping well short of his midline. This requires extra effort in the rotator cuff, trapezius, and rhomboids, and is therefore a senseless thing to do when running. It also often interferes with a runner’s lean, though I couldn’t see any major problem with that in this race. I caught Farah doing this in London in the spring too; prior to this year I don’t recall him doing this so much.

Farah did run with his chin tucked slightly down and back once it started raining, as did many runners. This is a simple and obvious response to the weather, helping to keep the rain out of the eyes. I particularly regret the finish line footage isn’t a bit longer, because as Farah came up the overpass just before turning right for the last stretch to the finish line, he suddenly lifted his head and ignored the rain, and the immediate increase in his upper body movement as a result of reducing this tension in his neck was really striking. If more race video becomes available in the coming months, it’s really worth watching the last couple of minutes of the men’s race to see this shift. 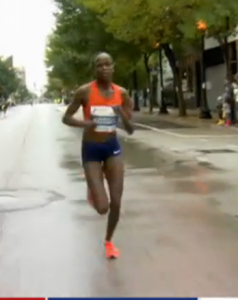 It’s a darn shame more attention wasn’t given to Brigid Kosgei, the women’s winner. Do watch the smidge of finish line footage in the video above, because she ran so well. I caught her on high speed video at the London marathon this spring and didn’t think she looked quite as good, but it could be the different impression I got watching her from the side rather than from the front as in Chicago.

She had a great lean, used her arms well, and had a superb core action which you can see in the video clip as well as my screenshot at the top of this article–a perfect runner’s contrapposto. This is only possible when the hands come to the midline and stay very close to the chest.

What would happen if Mo Farah ran this way?

The one elite runner with decent Chicago video available on the internet is Gwen Jorgensen, since she posted clips of her own including slow-motion on her Youtube channel.

An accomplished triathlete transitioning to the marathon, she struggled in this race. Her form shows a single, massive difficulty, namely her flexed torso.

If it doesn’t stand out to you in watching her run, use what I call the “finish line trick”–namely, watch what happens after crossing the finish line. Whatever a runner has been struggling to hold together will show quickly at that point. You can see it in the thumbnail image on the video before you hit play, as her upper body sags forward into waiting arms.

It’s tempting to talk about her head or shoulders, but both the sense that her head is too far forward and her shoulders are hunched are in fact a result of the torso flexion. By this I mean that her upper back is rounded (and thus her chest concave), preventing force from travelling from arms into legs, and at the same time preventing ground reaction force from effectively pushing her head forward.

It takes a lot of muscular work to hold the torso in this position and it also makes breathing much more difficult.

Changing this one thing–not by trying to straighten up but by using rotation to balance the effort in her flexors and extensors of her trunk–would make a really substantial difference in her performance at the same level of effort.

The kind of contrapposto we see in Kosgei’s running would be a transformation for Jorgensen… and maybe even for Farah.

If you want a better idea of what I mean about the contrapposto and the core action that makes it happen, as well as what role the arms play and how this makes the legs work better, you’ll get it from the Mind Your Running Challenge. It’s a free, short-and-sweet 10 minutes a day, one-week introduction to how all these things work together.

(Want to know who I am and how I can claim to know all this stuff? People sometimes do after reading my analyses. That’s here.)

I love readying these analyses! Thanks for posting them! I’d be very intrigued to reading your analysis from the IM world championships in Kona. The race was live streamed on IM’s facebook and there’s hours of running footage. Have you ever done this? It would be very interesting to hear your take on their form! Thanks again for all of the great information! I’m hoping you do some workshops in the states, because I would definitely be one of the first to sign up!

I’m glad you enjoy them, Christine! I am actually thinking of doing some triathlon analyses. Unfortunately it’s well past Kona now and I’m actually still struggling to get my NYC analysis done, but I’m putting Kona on my list for next year for sure. And at some point there will be workshops. I’m now living in the Bay Area in California, and I see clients one-to-one in Mill Valley. So that’s an option!

Got to suspect that Gwen Jorgensen’s form is, in part at least, many, many miles on the bike preparing for triathlons. The bike is a real posture destroyer. There is film out there of her as a collegiate runner, before the tri career, and it would be interesting to see that.