Why Runners Shouldn’t Use Ice (and what to do instead)

Do you go straight for the ice when you hurt yourself? Do you use ice baths to speed recovery from tough workouts? You’re certainly following authoritative advice in doing so — doctors and physios have been recommending this since 1978. That’s when Gabe Mirkin coined the acronym RICE, for “Rest, Ice, Compression, Elevation,” the four steps for treating injuries.

I have a story for you about that.

When I was a dancer in my 20s, I got very severe achilles tendonopathy (they called it tendonitis back then) in both feet. I couldn’t walk without pain, couldn’t even think of dancing, had a year of rehab that was worse than useless at a prominent physical therapy clinic for dancers, and at the end of that time was told I’d probably never dance again.

As the years pass, I’ve learned that the elements of that rehab are all now known to slow healing at best, if not cause further damage.

When I think of all the anti-inflammatories I took, month after month of ultrasound treatment (which breaks down connective tissue!), and all the pointless rest and counterproductive inactivity, I could just cry. At the time, I did.

Now I can add all those hours of icing each day to that list.

Gabe Mirkin recanted his recommendation to ice injuries a year and a half ago based on recent research. Whispers that icing might not be helpful as previously thought, and possibly even harmful, have been circulating in the sports community. However news spreads slowly, and odds are good you’ve still been icing the places that hurt. Let’s do something about that so you get better faster. 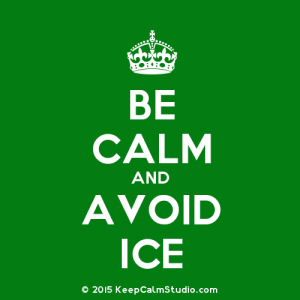 This past week Rebecca Dietzel, an anatomist and biochemist who has worked with my company in NYC, emailed me to tell me about the website she’s created with her colleague Jennifer Denys. They work together at Canada’s National Ballet School, and they made the website to share what research now shows about the effect of ice on injuries and recovery. They’ve also created an alternative approach to use instead of ice, which they call the BE CALM Protocol.

So why shouldn’t you ice? Because it turns out that icing constricts blood vessels, slowing and reducing the flow of blood to an injured area. This means that macrophages, whose job it is to clean up injured tissue, can’t get there as quickly or in large enough numbers as necessary. This slows your healing!

Furthermore, ice also slows the flow of lymph carrying debris away from the site of an injury –also not helpful.

The effects of icing last for hours afterwards, meaning hours of impaired healing. And many runners ice regularly, prolonging the effect.

As for ice baths after hard workouts, not only do they inhibit recovery for the same reasons ice interferes with healing, but they also reduce the ability of muscles to replenish glycogen stores, hampering your recovery.

Ice also “…results in losses of strength, flexibility, and the ability of our nerves to conduct signals to our muscles,” according to Dietzel and Denys.

The only reason to ice is that it provides pain relief. So if you have very intense pain, Dietzel and Denys offer a protocol of extremely restricted icing to help you cope.

What should you do instead of icing? For that I recommend you read about the BeCalm protocol from Dietzel and Denys’s website. They’re not charging for it or trying to promote themselves, they just want to get the word out, so everything you need to know is right there, concise and clear. Go read it now. Then tell your running buddies about it. Let’s really spread the word on this one.