There was plenty interesting to see in today’s NYC marathon. I caught a few things as I watched that warranted comment, and thanks to Jo Ann Mannino in NYC I also have video of the top five men and women from near the end of the race. Remember, if you’re going to be spectating at a World Marathon Major and can shoot some video and send it to me, it will be put to good use, I promise!

To start, let’s talk about heads, specifically the contrast between Sara Moreira’s head and the rest of the women’s field. Moreira pulls her head back, tucking her chin in close to her throat: 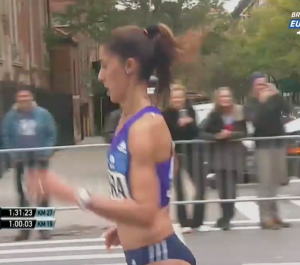 This isn’t so uncommon, actually, and in my clientele I find it usually appears when runners also struggle with their hip flexors, and the effect is to stress the low back. In this pic on the 59th St. bridge you can see how retracting her head makes her run upright, in constrast to the women around her: 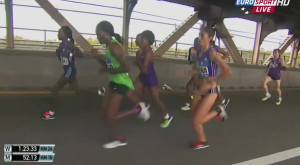 The effect of this is that she has greater vertical oscillation (bouncing up and down) than her competitors. In this pic you can see why: 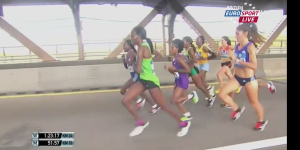 She’s on the same part of her foot as Sally Kipyego (in the green top) in front of her, but because of what she does with her head she’s leaving the ground at a much more vertical angle than Kipyego.

Meb also does this, and sometimes quite dramatically, but fortunately not so much today. In this picture you can see what he does, and that it also pulls him (in the white top in the middle) more upright than his competitors, especially Biwott (in the orange top, foreground): 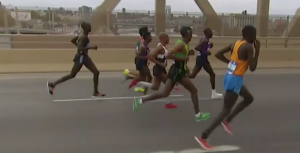 “Don’t let you chin stick out” is not at all an uncommon running technique recommendation, but as you can see from these pictures, it’s essential for your chin to move forward from your throat to run your best. I call it “face forward.” If this is a challenge for you, you can try this and this.

Hands: a (Not So) Tiny Detail

As I’ve said many times before, I love watching Mary Keitany run. Today was no exception, though to my eye she was looking a little flexed in the torso compared to her usual form, her shoulders a little narrower across the front than the back, but it didn’t seem to cause her any difficulty in winning.

Take a look at this picture of her running with Tigist Tufa. They have almost identical form, with Keitany bending her elbows and keeping her hands higher than is typical for Kenyan runners so her style looks almost Ethiopian: 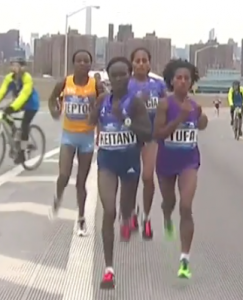 There is, however, an important difference between them: which direction their hands are turned. Unfortunately my screenshot is probably too blurry to show this but it was quite visible in the actual broadcast and somewhat visible in the videos below. Tufa has her hands turned so the palms face inwards, more or less towards her chest, as Ethiopians often do. Keitany has her hands turned a bit more downwards so that the side of the little finger is the leading edge of the hand on the backswing. It’s about a 45 degree difference in rotation between the two, accomplished by rotating the lower arm.

Seems like the sort of thing that wouldn’t matter much, but in fact it makes a big difference in how the back muscles and glutes activate. Keitany’s version fires the back more, allowing for a bit more lean, which also makes her smoother than Tufa. Tufa’s version creates more upper body rotation, and in fact towards the end of the race you can see her hands significantly crossing her midline, something Keitany’s never do.

I’ve said elsewhere that Keitany brings together the best of Kenyan and Ethiopian technique, and in small details such as these you can see it’s really true. The very high arms increase instability and forward lean, making for very fast running, and the way she turns her hands allows her to use her back powerfully, which is otherwise difficult with the hands so high.

Stanley Biwott doesn’t run in symmetrical fashion and his knees turn inwards, and so do Priscah Jeptoo’s. Over the years much has been said about Jeptoo’s form; I’m not aware of similar commentary on Biwott’s but then again it’s not quite so pronounced. In any case, neither of them appears to have legs that provide good support in midstance. To say they nonetheless run just fine would be something of an understatement. They are both phenomenal runners.

Unfortunately I don’t have good screenshots of either of them from the front, though you can see a bit in these videos:

In both cases you wouldn’t know from their upper bodies that their knees turn inwards. They both lean forward a great deal, and while I can’t explain how it could be that the legs matter so little — isn’t running about the legs if it’s about anything at all?! — the fact is that when the torso, arms, and head work well and the lean is really superb it appears there’s a lot of leeway in how the legs work. I say that not only from watching elite athletes, but also based on 13 years’ experience with clients in my own practice. So instead of worrying about any overpronation you may do, learn how to organize yourself well from the hips upwards instead. It can only help your running.

I haven’t commented on all the top finishers, as I think this blog post is long enough already. But here’s the YouTube playlist of all the videos. If you see something in them you wonder about, ask me in the comments!

On a totally different subject: I’m excited to tell you my work and my thoughts on the benefits of play for your running are included in the December issue of Runners’ World, in an article called Play Fast and Loose by Sam Murphy. It’s in the UK edition, I don’t know if it’s in the US one, but if you see it let me know! It’s a great article, and I’d still think that even if I weren’t in it, so please do give it a read if you can. I also contributed a tip on p. 23 of the magazine which originally appeared here. All of this following on the heels of a nice write-up I got in The Scotsman newspaper last week have made for quite the media week!

I’ve got a Kickstarter campaign coming up very shortly to share a tool I’ve come up with to help your running — be sure to jump on my mailing list, below, to make sure you hear about that!