What Sitting Does to Your Running (Part Two)

Nothing you do in your life affects your running as powerfully as spending eight or more hours a day sitting. Last week I explained the effect of sitting on the hip joints–an effect fairly well known already. This week it’s time to look at an effect that’s on almost no one’s radar.

The Effect of Sitting on Your Core 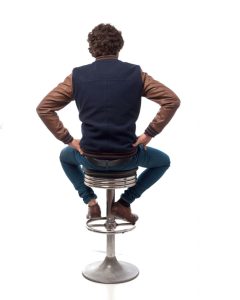 Chairs do something else besides keeping your hip joints flexed to about 90 degrees, and it’s at least as counterproductive for running: they keep your pelvis level.

The funny thing about this is that even though it’s as unnatural as having your hip joints constantly flexed, we don’t tend to recognize it as a problem.

Instead, it’s quite common for runners to be told that maintaining this levelness is important to prevent injury and improve their performance.

Research confirms that the pelvis and lumbar spine move in the frontal and transverse planes in both walking and running—that means the pelvis tips right and left a little like a seesaw and also turns one side forward, then the other.

It’s easy to understand why this is important. We have two legs, neither one is in the middle, and neither one comes to the middle when we run (and if we try to make it do so we cause a lot of stress to the muscles and connective tissue on the outside of the hips).

So we have to make side-shifting and turning movements in our core in order to shift our weight from leg to leg in a way that it can be supported.

Failing to do this is just as hard on the body as failing to get your pelvis far enough forward over your stance foot, only it’s your gluteus medius and iliotibial band that take the stress, and sometimes other areas lower down on the inside or outside of the foot and ankle.

Doing this well is just as important as extending your hips well when you run. And when you walk, for that matter. Both front-to-back (in the sagittal plane) and side-to-side (in the frontal plane), you have to get your weight over your supporting foot in midstance in order to move well and feel good.

So why is no one talking about the level pelvis problem from sitting? I’ve got a few thoughts on that as well as some resources to help you begin to feel how to let your pelvis move, and I’ll share them with you next week.