In last week’s post, Why Your Quads Are Sore, I wrote about what a tendency to get sore quads indicates about your running technique — namely, that your pelvis is behind your foot in midstance, requiring your quads to contract strongly to keep you from sitting on the ground. This week let’s look at what you can do about it.

The main thing runners do about sore quads is symptom management: just make them feel better now. The hope is often that if you can fix them well enough, and restore them to normal function, that they’ll work normally and not get so sore next time.

That doesn’t usually work because it doesn’t address the underlying running technique cause, but still, every runner needs symptom management from time to time so here are my thoughts on the main options:

Tackling the Root Cause

Runners trying to sort out the causes of their quad soreness are tackling the real problem — bravo! However some of the most popular solutions won’t get you the results you’re looking for. These include the following.

The way most runners go about core strengthening, by training themselves to hold their pelvis as still as possible, this won’t solve the problem. That’s because it interferes with the main mechanism for balancing you properly over your foot, namely your trunk counterrotation, which I call the core action.

If your core strengthening includes standing exercises in the transverse plane, lots of work balancing on one leg (and the other 🙂 ) and back and glute strengthening without co-contracting your abdominals, then it probably will help.

But your basic Pilates mat class or doing a whole lot of planks will not do the job, and trying to tuck your pelvis or in any way “correct” an anterior pelvic tilt will likely make the problem worse by throwing your legs even more in front of you.

If you strengthen all the muscles of your legs, especially the glutes and hamstrings and calves, they you can get a similar effect to the core strengthening protocol I just described — it can to some extent balance your gait so you’re more over your foot in midstance. However the improvement is likely to be modest, and you’ll still have the tendency to sore quads, just less so than before.

If you have the idea that your quads get sore because your legs are too far in front of you, you might be tempted to exaggerate the backwards swing of your leg to try to correct this. However it only makes the problem worse by creating drag, slowing down the forward movement of your body so you’re even farther behind the other leg.

The idea that the legs ever swing backwards in running comes from watching people run on treadmills; in fact from the moment your foot leaves the ground it moves forward, never backwards, and the faster you move it forward the better balanced over your stance foot you’ll be.

If that’s hard to picture, try exaggerating the “backswing” of your legs, then try bringing them rapidly forward instead (not the same thing as lifting your knees — think forward, not up). You’ll feel the former slows you down and is a lot of work, while the latter speeds you up and is easier until you get tired from running faster.

This idea comes from a reasonably accurate understanding of the problem, but it generally doesn’t work for the same reason that doing anything on both sides of your body at once never works: because the two sides of your body always need to be doing opposite things when you run.

Furthermore, the glutes don’t work when people think they do. They don’t work during the push-off, they work at midstance to keep you from falling forwards on your face… if, that is, your weight is far enough forward over your stance foot. And the nature of that work isn’t what you’d call a “squeeze.”

Okay, so all of that won’t work, or at least not well enough, and some of it will actually worsen the problem. What will make your sore quads a thing of the past (except on super-hilly runs)? Learn all about that and get the resources you need here. 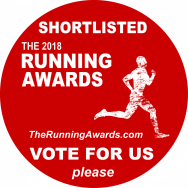 Take a sec now to vote for The Balanced Runner under “Publications & Online > Blog (Professional)” in the finals for the Running Awards 2018.

As a perk, the Running Awards is offering discounts for running kit when you vote.

And you’ll have my most heartfelt thanks as well.

swimsmooth.com used to have an animated swimmer optimally making the full stroke, you could pause at any point in the rotation/ stride. Is there a way you could develop one or more of these perfect stride mechanics animations? This for me would be absolutely amazing! thanks

That would be challenging to make, I’d need to find a partner with the equipment and know-how, since unfortunately I can’t just take the top of my head off and let you see the movie in my mind. 🙂 Great suggestion, thanks. I’ll look for the opportunity to do something like that.

Previous Post Why Your Quads are Sore Next Post Last Chance to Work with Jae in Edinburgh!