A few days ago the New York Times carried an article about new research showing Usain Bolt has unusually asymmetrical gait for a world-class sprinter. How do we square this with his extraordinary performance and what does it mean for you and me?

The article reports that analysis by researchers at SMU shows his right leg generates 13% more peak force and his left foot is on the ground 14% longer. By comparison, most elite sprinters have between 0-7% difference.

I did a lot of googling after reading the article, and found among other things a post by a mommyblogger in the scoliosis community about telling her son that Bolt has scoliosis, just like him. The child’s eyes lit up with wonder and hope.

Now following this NYT article, I think asymmetrical runners around the world may have a similar spark in their eyes.

It’s widely known that Bolt has scoliosis and thus it seems hardly surprising that his gait may reflect this even though he trains diligently to prevent the back pain that’s been a major vulnerability.

When asked if Bolt might actually run faster if he trained his legs to function more symmetrically, the researchers at SMU rejected the idea, suggesting instead that the asymmetry is likely a necessary adaptation Bolt has made.

It’s Not Just About Sprinting

If you’re a longtime reader of this blog, you’ve probably already guessed where I’m going with this: Bolt‘s asymmetry is consistent with what I’ve seen over and over in distance runners.

The three runners in the Breaking 2 Project all shortened from shoulder to hip on the right as they fatigued. As a matter of fact, runners commonly shorten on the right. 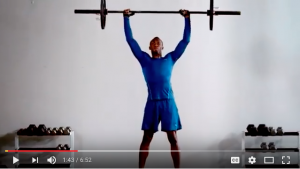 As the Times article reports, Bolt‘s scoliosis means his lumbar spine bends to the right, making him a bit shorter on the right side. It then curves back the other way in his thoracic spine. This pic of him shows the overall shortening of his right side from hip to shoulder.

A trunk that bends or shortens to the right should produce longer ground contact time on the left foot and greater impact on the right–exactly what the SMU researchers found. A shorter right leg, which Bolt also has, should further intensify this phenomenon.

So the analysis of Bolt‘s gait maps reasonably well onto his scoliosis and suggests what a similar analysis of other runners bending rightwards might show.

And that’s a lot of runners. In my 15 years of professional practice with distance runners, if I had a nickel for every distance runner whose right foot makes a louder sound than the left or hits the ground harder and a left foot that stays on the ground longer I’d be a wealthy woman.

However if I had a nickel only for the runners who evidenced the exact opposite, and you and I met up for coffee to discuss it, you’d be the one buying. I wouldn’t have two nickels to rub together.

The more I investigate this phenomenon the more body systems I find that introduce this asymmetry into our apparently symmetrical form, including universal right ear dominance and asymmetrical organ weight.

So it appears Bolt is yet another exemplar of what I think of as the Baryshnikov phenomenon.

I once heard a story about the great ballet dancer Mikhail Baryshnikov being queried about the significant differences between his two sides, and how he handled that when he had to switch choreography over to the other side (a common task for dancers).

His answer? “Well, I do it differently.”

The Larger Significance of Symmetry

If I had any sense at all I’d end the blog post here, but reading the Bolt study sent me hunting for the Jamaican Symmetry Project, a longitudinal research project following rural Jamaican children that I’d meant to keep closer track of.

That recast the fairly simple, consistent pattern I’ve been seeing into something with many more factors and sent me down into a rabbit hole I’ve barely clawed my way back out of to write this post.

One paper generated by that study was this one showing a positive correlation between knee and ankle symmetry and sprinting performance in elite Jamaican sprinters. Another paper showed children with more symmetrical knees and ankles at age 8 performed better in sprinting 14 years later.

However in both studies foot and trunk symmetry were not correlated with sprint performance.

But we can contemplate some interesting questions:

In the paper I linked to above on elite Jamaican sprinters, Trivers et. al. write,

In this paper we show that elite athletes have markedly more symmetrical knees than countryside controls and also more symmetrical ankles, while symmetry of feet does not differ between the two. We further demonstrate that within elite sprinters, performance shows striking and consistent positive associations with both knee and ankle symmetry…Considering only the 100 m sprinters (n = 32) we find positive correlations between degree of knee and ankle symmetry and world performance. It also seems noteworthy that overall symmetry decreases among those who run 200 m, 400 m or 800 m races, as if adapted to or caused by frequent left-hand turns.

So for folks wondering about the effect of Bolt’s 200m running on his structural symmetry, there’s a possible factor.

But it’s the more basic questions that are most pressing to those of us whose job it is to help runners of all levels run healthy, enjoyably, and up to their potential.

The right-side-short asymmetry I’ve seen in distance runners, and that seems also to be present to exaggerated degree in Usain Bolt, appears to be so common it’s tempting to call it “natural.”

So is it part of the human heritage, a vulnerability we’ve always had to struggle with? That’s hard to believe if indeed evolutionarily we are running animals.

…it has been known since the 1950’s from experimental work on Drosophilathat stress during early development is associated with greater adult bodily asymmetry, as is genetic inability to deal with the stress (e.g., inbred vs. outbred). This led to the notion that fluctuating asymmetry (FA) – deviations from bilateral symmetry in paired traits, randomly distributed to the left and right side – is a measure of developmental instability, i.e., the inability of an organism genetically to buffer the system against stressors to achieve the optimal state, namely symmetry itself [5]. The key is that if a population shows true FA then it can be presumed to be attempting to be symmetrical, so that failure to do so is a measure of failure to reach–in the face of developmental perturbations–the phenotype that the genotype is aiming for.

Based on this, if the right-side-short asymmetry I’ve been seeing is widespread then it would seem it isn’t subject to fluctuating asymmetry because one never sees the opposite.

So I’m still left without an answer for my trunk symmetry question. Luckily my arsenal of methods to deal with it continues to improve–here’s one of my best (for asymmetry as well as footstrike).

I’m still optimistic that someday I’ll find a big picture explanation for it that makes sense and empowers us all to run healthier and better. The answer is out there.