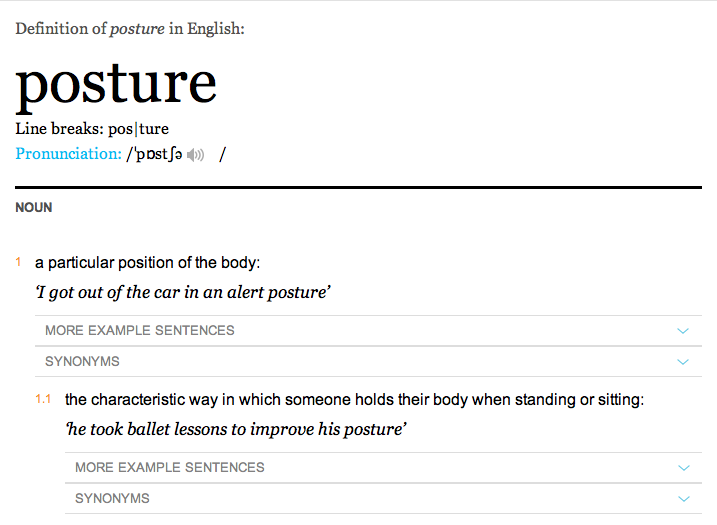 My jumping-off point for this post is a quote in the title, from Moshe Feldenkrais, creator of the Feldenkrais Method of Movement Education®. It is particularly relevant for runners working on their form and has a nice zing to it. However, I could simply have started from the Oxford English Dictionary’s definition, seen above.

The fundamental idea behind “posture” is “position;” there’s no movement involved. A position is static, as is a posture. Is anything still when you run? Obviously not the feet, legs, and arms, but what about the pelvis, spine, the shoulders, the head? I’ll go through them one by one:

The pelvis moves in all three planes of motion when you run. This video of the BK Methode developed by Frans Bosch in Holland shows this motion of the pelvis in video and animation nicely. I don’t speak Dutch and I debated whether to share a video when I can’t understand the narration, but it’s a handy visual and I think a lot of Bosch so I’m going to take the risk. (If anyone out there wants to translate it for me, there’s a free copy of the Core Action Program in it for you!)

The spine could hardly be still if the pelvis is moving, since they’re attached! But beyond that, the spine performs the well-known counterrotation, twisting in the joints of the last thoracic vertebra, more or less in the middle of the trunk. In addition, the lumbar spine sidebends as a necessary component of the movement of the pelvis in the frontal plane (tipping right/left like a seesaw) and the whole spine also does a complex flexion/extension movement diagonally from each glute to the opposite shoulder (one diagonal extending while the other flexes). Depending on how you run there may be more or less of this action, and the runner we’re watching in the BK Methode video doing a fair amount of this does not look like a distance runner.

The shoulders turn as part of the trunk counterrotation that turns the pelvis the opposite direction. They also move to help create the armswing – you can’t move your arms much if your shoulder blades (or shoulder girdles, to be precise) don’t also move. This means that they rotate – meaning turning like a dial on your back – and also abduct and adduct – meaning moving away from and towards your spine.

The head moves side to side, supported first by one foot, then the other.

In fact, even setting aside the up/down movement of the whole body in running, there is no part of the body that travels in a straight line. We turn, flex, extend, and sidebend every part in the process of creating forward motion using our two legs. So does every other animal, on however many legs it may have. Running is movement, not only through space but also within the body. There are no positions, there is no such thing as “running posture.”

“Posture is for posts,” according to Feldenkrais, and when you run you are not a post, though to the extent that you do try to maintain any sort of posture someone may tell you that you look like you’re running with a stick up your umm-hmm.

When you work on your running form, work on the movements of running and forget about posture. Good form is about timing and coordination, every part doing its part in proper relationship to the whole. This shift of focus alone will make you a happier, healthier, faster runner.

HI Jae:Wonderful post about posture.We missed you at the New York Conference in honor of Kevin Crredon.Stazi ran the show and Larry Golfarb helped out.My ankle is almost there for running.Had all the metal taken out in December.All the best,Charles Velez.

Thank you Jae! This is a great visual! It would be amazing if someone could translate this as I’m sure the verbal explanations would be awesome too!

Previous Post When Can I Stop Thinking About My Running Form All The Time? Next Post How to Fix a Tight Hip Flexor When You’re Running