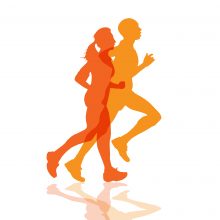 The other day I was outside with a client, watching him run and asking him to notice certain things he was doing. A man I didn’t know walked past my client as he ran to the far end of the block, then offered the opinion, “He looks absolutely fine, he just needs to run faster.”

As with all unsolicited advice, the chief problem was that the stranger hadn’t bothered to ask what the runner wanted. Many runners don’t care all that much about running faster – running isn’t about racing, it’s about enjoyment, health, time in nature, and/or a peaceful, meditative experience. Such a runner might want help with injuries or the sense that running doesn’t feel as good as it ought to. It’s presumptuous to look at a runner and just think about “fast” and “faster.”

But say the runner I was working with did want to run faster; a lot of my clients do. The advice is still preposterous. “Just.” Have you ever tried to set a new PB? You just need to run faster. It’s simple!

Easy with the eye rolling, you don’t want to strain any muscles. Every goal-oriented runner knows that this “simple” thing, running faster, is anything but. Practically everything such a runner does is aimed at achieving this, trying to thread any number of needles – especially the trick of training hard without getting injured – and even then can prove elusive. You can train fiercely, commit to proper recovery, optimize your nutrition, cross-train, pre-hab, get massages and physio, and work on your mental game and still feel stuck on a plateau.

The thing is, in addition to all those important activities, running faster also means running differently. Your technique has to change. Coaches often rely on these changes coming automatically as a result of training, but sometimes they don’t – many runners can’t feel what they need to do to increase their speed at certain thresholds even when their fitness should make it possible. Some react by keeping the mechanics of slower running but increase their effort, which is like trying to drive a car on the highway in too low a gear. Others just can’t work it out and their speed tops out mysteriously.

The only way to fix this is with a learning process. Most runners need to learn how to run faster technically, as a separate issue from their fitness. They need help becoming more aware of how they’re running to begin with, then the opportunity to learn through experience and exploration what changes make running feel easier. They also need to stop equating running fast with running hard, since often it’s the very idea of running fast that makes a runner cling to technique that is too much work, and thus too slow.

Moshe Feldenkrais said it best: “Where you feel great effort is where you lack skill.” As we mark the end of International Feldenkrais Week 2015 it seems fitting to quote him again. There’s nothing “just” about improving your skill, there’s nothing “just” about learning, period. It’s one of the most rewarding activities there is. If you’re working as hard as you can and not getting results, don’t listen to anyone who says you need to work harder. Instead, it’s time to learn.