How a Forward Head Actually Can Cause Stress for Runners

Today, as I continue to write my series of blog posts on stress, I’m sitting up tall with my computer set on a stand to bring the screen to eye level. I’ve got all sorts of techniques for avoiding forward head posture and that’s been true now for awhile. But despite them, and despite the fact that my forward head in running and cycling is not the stress-inducing forward head posture because my back is straight and I’m well-organized to handle and direct the forces involved in my movement… that movement has still caused me a lot of stress. And maybe you too. Why?

The Forward Head in Movement

Let’s revisit why you position your spine on a forward angle in movement. Generally we do it when moving fast. In fact, I haven’t been able to think of a single movement that humans do fast in which we don’t lean forward, except for possibly things like driving a race car or flying a plane in which case we’re completely enclosed by a machine. 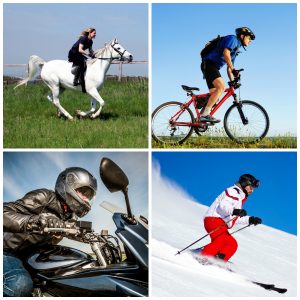 Why would it be different to be enclosed by a machine? Because in that case you don’t have any wind resistance.

If you’re not enclosed you have to push your way through the air, and it pushes you backwards. At slow speeds such as walking that’s not a big deal, but the faster you go the bigger a deal it is, until at the high speeds of horse racing, bike racing, speed skating, etc. the athletes bend way forward to make themselves as small as possible and minimize the energy it takes to push through the air.

In running we lean forward from the ankles to start, using gravity to help us fall to make it easy to get into motion. Once you’ve fallen into your run, so to speak, continuing to lean forward helps you push your head in the direction you’re moving, counteracting the backwards push of the air. If you don’t do that, you have to tighten the muscles on the front of your body to keep yourself from bending backwards, and that takes extra work. You also increase the surface area that catches the air, which likely makes you have to work harder.

The faster you run, the more you lean, making yourself yet more aerodynamic and also allowing you to lengthen your stride without having to increase the hyperextension of your hip joints or overstride. (That holds true right up until sprinting, at which point we’re out of my area of expertise.)

So we move our heads forward to move fast. That’s good movement, so where’s the problem?

The problem has to do with the reasons why we move fast and how much of our time we spend doing it.

As a New Yorker I learned how to hustle, and I learned that with enough drive and a sufficient amount of caffeine it is possible to move fast nearly all the time. In fact it’s pretty much expected in NYC, and if you don’t move that way people will get irritated with you because you’re in their way.

When I moved to Edinburgh, Scotland, it was a huge relief not to live in that environment any more. I could walk with a calm sense of purpose and that was fast enough. I could be direct and efficient without having to sustain the heightened state of alertness required to thread my way through small gaps in heavy pedestrian and vehicular traffic at unreasonable speeds back in the Big Apple. I nearly always had the time to lift my eyes and enjoy the beauty of the place, take a breath and savor the clean and fragrant air.

Then I entered into a high-pressure year of my life and that stopped being true. If I was on foot I was rushing. Going to the bus stop I nearly always broke into a run. Cycling, I raced the clock up and down the hills of Edinburgh. I leaned low over my handlebars to shoot downhill as fast as possible, with my eyes darting around for other traffic, heedless pedestrians, and other dangers. I moved through the world with a forward lean and an even more forward head, and I was stressed. And when I went for a run, I was exhausted afterwards.

We move fast either because there is pressure of some kind or out of exhilaration. But mostly because of pressure.

The pressure could be life stress, too much to do and too little time. It could be to escape danger or to catch something badly needed or urgently desired — prey, the football, a PR. Whatever the reason, if you spend too much of your time moving fast, you are experiencing too much stress.

One of the topics I find most compelling in endurance sports these days is what Mark Sisson of Mark’s Daily Apple calls “chronic cardio,” meaning training at too high a heart rate/running too fast all the time, with very destructive health consequences. Phil Maffetone has done amazing work to define this problem and offers an elegant, simple-to-implement solution with his MAF Method.

I generally don’t discuss this and training in general because I’m a movement expert, not an exercise scientist. But I’ve had a sense for quite a while that most runners run too hard too often, and this leads to injuries otherwise avoidable, so to me this theory explains a lot.

In my own experiments with the MAF Method, I’ve learned this includes me, and helps explain why running so often seems to sap me even as it helps me be my best in some ways, making me smarter and happier.

When I stick to my MAF heart rate, keeping out of the stressful chronic cardio level of intensity, I’m moving so slowly I barely lean forward at all. Since I’m used to running a certain way, this can be annoying. But the striking thing about it is that I don’t need to recover at all afterwards. The difference between how I feel postrun at my usual intensity and at my MAF heart rate is so pronounced: after a MAF run I feel I have not stressed myself. I don’t feel sapped at all.

Now once one adapts to burning fat for fuel (something I’m sure this ex-dancer never learned how to do in my life thus far), one is supposedly able to run faster at the same heart rate that now demands only very slow trotting. I actually worked on this through the fall, and though I followed the diet I was supposed to, the only times I ever found I could run faster without exceeding my MAF heart rate were immediately following a full night of sleep. There were only a couple of runs like that.

By contrast, as my stress levels mounted, I actually found I had to run slower and slower to stay at my MAF heart rate.

Stress is stress is stress. Life stress, fitness stress… having some is normal, having too much and not having a break will break you down.

How much time to you spend with your head forward of the rest of you? Do you do it at your desk, under stress from work demands and really unhealthy ergonomics? Do you do it while running, always at too high a speed? Or, as it was with me for too much of the past year, do you simply do it all the time?

I think this simple physical relationship between your head and your pelvis can be a pretty good measure of the total stress load in your life. And reducing the amount of time your head is in front of your pelvis for any reason can represent a meaningful improvement in your health and quality of life.

Running fast is fun, I’m not saying you never should. But take a good look at the intensity of a normal run for you and how intense the rest of your life may also be, and ask yourself whether really, in your heart, you don’t wish you could slow down a bit.

Maybe your running is the only thing you can slow down but doing it would feel like some kind of failure. But taking care of yourself is never a failure.

Maybe your overall stress load in life is pretty low, and you have plenty of time to recover from stressors, including the occasional fast run. Your body will tell you if this is the case. Enjoy.

As for me, I’m finally back to running. To ensure I stay at my MAF heart rate—or frankly a little below that because honestly, what’s the rush?—I’m doing tank runs. 100 steps running, 100 steps walking. Very low stress, plenty of time to get to know the trees and wildflowers in the park near my new home.

Care to join me for a leisurely trot?

Interesting that you managed the MAF method. I need to practice running slowly. I sometimes find it harder, technique wise, than fast running, although obviously faster running makes you tired quicker.

Running slowly is more technically difficult. Or rather, you experience your difficulties more clearly, because speed hides them. But that’s also another reason it’s so good for you! When you can run slowly comfortably, you can run faster comfortably and without paying for it afterwards. When running slowly, don’t think “jogging,” think “trotting.”

Previous Post How to Fix “Forward Head Posture” Next Post How to Make Sure Your Running Relieves Stress (instead of making it worse!)