Last week I wrote about the top women finishers of the 2016 Boston Marathon. Today I have some observations about the top two men, Lemi Berhanu Hayle and Lelisa Desisa.

The two men run a bit differently and both run well, so while we could use the images below to compare them to each other, the greater value is in using the way they echo each other to help us see running more clearly overall. 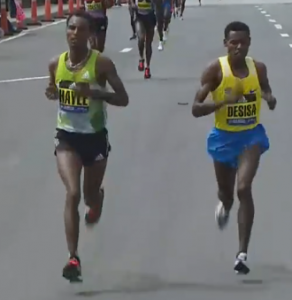 Here are Hayle and Desisa right before footstrike.  See how their upper bodies are turned towards the forward leg. You can also see Desisa’s left hip is more lifted than Hayle’s right; this is the core action at work, and Desisa is moving more than Hayle. 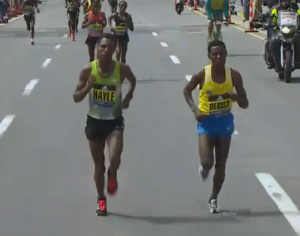 Here they are just past midstance. See how their chins and necks align with their stance feet. Their inside hips (Hayle’s left, Desisa’s right) are a bit lower than their outside hips; as they have stored elastic energy in their torsos at the point of maximum compression in midstance by slightly undulating the stance side of the pelvis up and the swing side down. 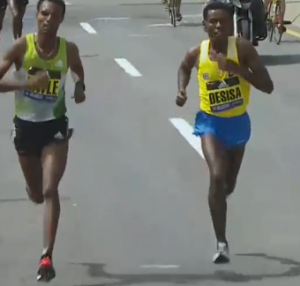 Right before footstrike on the other foot, see how their heads have moved to align over the forward foot. Their outside shoulders have moved up, away from the swing foot that has just left the ground; this shows the lengthening of the entire side of the body that occurs around the time of toe-off. Their upper bodies have turned away from their swing leg and towards the front leg. A particularly beautiful illustration of how trunk movement and limb movement are interwoven in running. 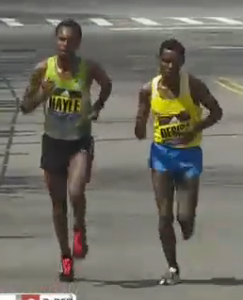 Here Hayle and Desisa are on the same leg in midstance. You can see Desisa’s body has compressed more than Hayle’s — his pelvis tilting, shoulders tilting the opposite direction, and head tilting. His trunk movement (or core action) is larger than Hayle’s and though this is connected with smoother running and, in my professional experience, lower perceived exertion, in this particular case it was also a signal that Desisa’s legs were fatigued and he was moving his trunk more to compensate. The line between optimal core action and excessive core action (indicating fatigue) is a fine one. 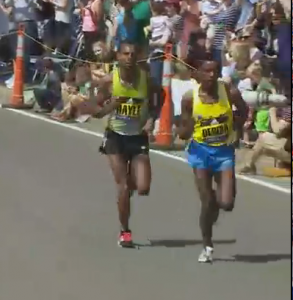 Here are Hayle and Desisa in the same part of their gait cycle but from a different angle, and again, it’s the similarities that are most pronounced. You can see the compression through the entire stance side of the body, with the pelvis tilting away from the stance leg, the shoulders towards, the head away (chin points towards the stance leg) and neck aligned over the stance foot. We focus so much on leg movement in running, and the compression and extension of the legs, but from these pictures it’s easy to see the torso participates meaningfully in these actions.

What do you see in these pictures?

It looks like one of the actions is for the body to align the heaviest load over the foot striking the ground then transfer as the next strike is anticipated. The head is very heavy so you can understand that and if there is a spring in use,( compressed core or extended calf for instance), it makes sense to line it up as well. The dropped hip of the swing side limits the lifting of the swing side to the minimum height which would seem offer the smoothest and most economical pathway for the swing leg.
But I’m no expert!!

Great observations, Jim. The swing hip will rise and move forward through late stance, though, to create the classic stag leap position in flight. I believe elastic loading of the trunk in this moment of midstance assists with that.

On the final image (a quartering shot showing both runners mid-stance) it looks like Desisa’s right foot is turned out (abducted) relative to hip and knee alignment. I would think this would result in “off-axis” forces in the ankle joint (to say nothing of the rest of the kinetic chain) and a resultant loss of power and “shortening” of stride due to the true point of push off being more lateral to the big toe than say between the big toe and its neighbor.

Great catch, Ben. See my comments to Linda, though. Everything you say makes sense, but then again where the rubber meets the road it often seems to work better. If you have a choice between underpronating and overpronating, definitely pick overpronating!

I am really enjoying your analyses of the Boston Runners.

Also, it looks to me that as Desisa gets tired (i figure the last picture is later in the race?), his right foot seems to be taking his weight down into himself rather than propelling him forward.

I feel a little bit haughty even mentioning these things, being that they are world class marathon runners! But it’s a lot of fun to look at.

Great observations, Linda. I wondered when I posted the pictures what people would make of the differences between their feet. Conventionally therapists looking at footstrike just look at the foot on the ground, but you can see the same patterns in the swing leg so clearly! I didn’t comment on these differences in my post because other opportunities were more unusual, but even though Desisa seems to overpronate by conventional definition, I’ve noticed runners who organize their feet and legs that way seem to create less braking force and run more easily.

Really great photos Jae…perfectly illustrating what you explain so well.

Thank you, Sue! Lovely, as always, to hear from you.

Nice capture of the images. I agree it’s interesting to see the similarities between these two great runners, and how much their upper body and torso’s play a role. Question about head position…are you saying that their heads are tilting slightly from side to side? And to a degree, that’s a natural action you’d want to encourage?

They are tilting a bit side to side, and you’d expect to see that — specifically to see the chin pointing towards or lined up with the stance foot in midstance — when the trunk action is very dynamic. The head should shift side-to-side when you run, supported by one foot then the other. If it doesn’t move, then the gait becomes too narrow and your effort increases relative to your pace.