In the 2016 Chicago marathon there were plenty of interesting details to see, both in the exciting duel between Abel Kirui and Dickson Chumba and in the Florence Kiplagat’s definitive solo run to the finish line.

Florence Kiplagat has beautiful technique, with a very smooth stride born of great pelvis and upper body movement. The tempation to compare her to Edna Kiplagat when they’re in the same race is irresistible, as my moment’s concern about not getting them mixed up fades as I remember how differently they run. They’re both running true to form, and you can read more of my take on Edna in my analysis of the 2014 London Marathon.

There is a funny quirk in Florence’s nearly flawless form, though, and I’m not sure if it’s normal for her or it was a problem specific to this race. Video from the end of the race shows that she turns her upper body significantly more to the left than right and everts her left foot too much at footstrike. These exaggerated movements counterbalance each other; perhaps she always does this or perhaps it was connected to some pain in her foot or leg. At moments she seemed to tilt to the right as if her left leg weren’t taking her whole weight–it looks like she’s going around a corner but she was actually running straight ahead.

When she crossed the finish line and stopped running, she distinctly limped in her first few steps, looking as if her right leg wasn’t reliably holding her weight. That would be reasonable if, as it appears, it did more than its share of work through the race.

Unfortunately I couldn’t find any video of the race on YouTube yet. However in these screenshots you can see what I’m talking about.

First, here she is turning her upper body right as she prepares to land on her right leg: 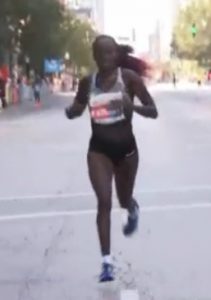 Here she does the same to the left, but turns much farther (unfortunately her foot is covered by text in the video): 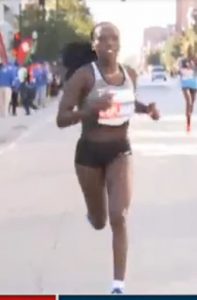 And here she lists right, as if she were banking into a right hand turn, except that there’s no turn. For comparison look at the man next to her, he’s in the same part of his gait cycle and he’s completely upright. 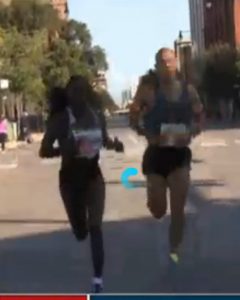 Hopefully she’s okay. After all, just because there’s an asymmetry doesn’t necessarily mean there’s pain. Thank heavens for that, or we would all be in trouble. But it does look like something was bothering her.

This was an interesting duel. As I always try to remember to say when I write these analyses, the best running technique does not necessarily win the race, it’s just one of a whole array of assets that come into play.

Best technique indeed did not win the men’s race. Kirui has a very interesting, very large arm asymmetry, and despite the neat appearance of Chumba’s technique he wasn’t even either.

Luckily I was able to find two clips of the men’s finish, but first take a look at these screenshots to get a sense of what I’m talking about. 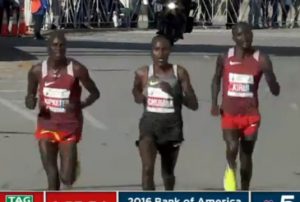 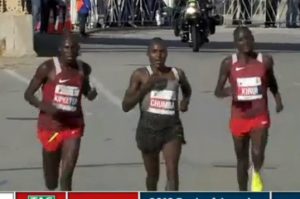 Although the low right arm is a constant for him, the head doesn’t always remain exactly like that. As one of the race commentators noted, his form was continually varying.

However the right arm caused him a lot of extra work, and you can see that in this video. Watch how much his head and upper body bob and jerk as he runs, compared to Chumba.

I get a sense he’s working very hard with his head and left shoulder to shift his weight from side to side, against the drag from his right arm. I suspect there is a story about his arm, but I don’t know what it is and google was no help.

In any case, he had the strength and stamina to deal with this asymmetry and beat Chumba.

Regarding Chumba, if you take a look at the pics above again, you’ll see his head stays a bit to the right–not tilted, but translated–regardless of what leg he’s on. He seems to cope with this fine, and his head movement is incredibly smooth and form overall looks very comfortable. This isn’t the sort of thing that would necessarily cause a problem in any given race, but he probably feels his legs are strong in different places, and at times you can see what people call overpronation in his right lower leg and foot as a result of his head’s shift.

Here’s a final highlights video that has better-quality images but unfortunately the aspect ratio is wrong, so the runners all look stretched vertically and all the things I’m writing about are paradoxically harder to see than in the lower-res broadcast video and even my lousy screenshots. However you can get a peek at Kiplagat at the end.

What else do you see?

Thanks to everyone who filled out my short, 3-question survey last week telling me what you want me to blog about and what popular movie you’d like me to do a running form analysis of. If you haven’t had a chance to do it yet, it’s not too late! You’ll find it here.