Races that include Mary Keitany are very easy to write about from a running technique perspective because having her clean technique for comparison helps make it clear what other runners are doing. This is definitely the case in the 2015 London Marathon.

Last week I wrote at length about armswing and upper body coordination in the 2015 Boston Marathon, and Keitany’s superb gait allows me to continue the discussion today. One of the things that makes her so great (though she did not win this race) showed up quickly after the women’s start. (She’s in white with long sleeves, in the front.)

In this photo you can see how much she’s turning her shoulders. Look at the video from 6:50 and you’ll see in motion that she’s turning them a lot even from so early in the race while every other woman in the elite field holds theirs fairly still and swings their arms instead. If you skip ahead to 13:42 in the video, you’ll see that most of the elite women are now turning their shoulders about as much as Keitany.

In other words, everyone else first had to warm up in order to run the way Keitany runs even when she’s cold. In my practice I always look at clients run cold because that’s when you see the movement habits they always have with them, which they correct for after they’ve warmed up for 10 minutes or so. Correcting for habits isn’t the same as not having them to begin with; those corrections require extra effort.

Now let’s consider what Keitany’s movement habit does for her. In running, the action of the lower body must be counterbalanced by a counterrotation of the upper body. There are many ways of creating this counterbalance, which is useful since it means we can manage to run while doing all sorts of things: carrying, throwing, pulling, pushing, etc.

In my experience, the fastest, most economical-feeling way to create this counterbalance is with your spine and ribs, particularly your upper thoracic area, while your arms are kept compactly close to your body and high up. This is different from how people usually think of running, namely in terms of swinging your arms as you move your legs. Really you rotate your upper body, in a place that most modern people are not used to feeling terribly mobile but the spine allows for plenty of movement.

Mary Keitany’s movement habits cause her to run this way from practically the first step, she’s mastered it and it makes her fast while saving energy.

Looking at the rest of the elite field in the marathon, both women and men, we find a range of armswing/upper body coordination patterns, all of which relate to the legs though this relationship is only sometimes visible. Here’s an overview of the main strategies I find:

In this style, upper body counterrotation occurs in the spine and ribcage, including the first rib, with the arms in an accessory role. Hands are high, near collarbones on the forward swing, and very close to the trunk, keeping the center of gravity high and compact.

Keitany runs this way (though she’s Kenyan – I’m just making general categories here, any individual may do anything). So does the winner, Tigist Tufa. Take a look at her at 1:13:26, where I captured the screenshot above. You’ll see Tufa in red on the left and Keitany in white on the right, with Mergia in purple running in the same style and Tsegaye doing something else I’ll cover below. If you look at Tufa at 1:37:04 you’ll see the amazing core action enabled by her armswing, especially impressive from the back as you see her whole back, pelvis, and shoulders in motion. This movement is what makes her head seem to glide so smoothly while her legs churn under her. It’s a beautiful win.

Though there are a number of elite Ethiopian men in the race, none runs this way. 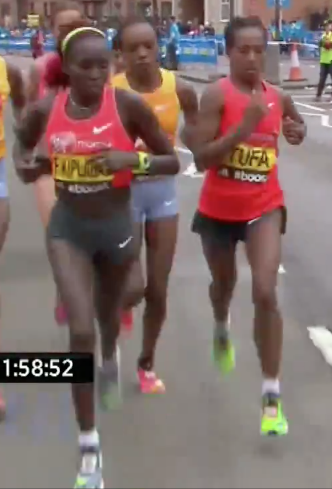 In this style, upper body counterrotation occurs in the spine, ribcage, and arms. Hands are medium-high, near the heart on forward swing, and very close to the trunk, and the whole upper body is turning, with the focus on the chest. The degree to which the shoulder girdle is differentiated from the ribcage varies; sometimes there doesn’t seem to be much independent movement of the shoulders relative to the thorax.

You can see Florence Kiplagat running this way in the screenshot above, with Tufa beside her for contrast, in the exact same part of her gait cycle on the opposite leg. The section of video above, from 1:13:26, is great for comparing all the top women.

A number of the men run this way; in the screenshot here you can see Mekonnen, Regassa, and Kipchoge doing it (it’s not apparent in this pic but Tsegaye is actually doing something else). Watch from 37:30 to get a good look at the lead men, most of whom have this strategy.

In this style, upper body counterrotation occurs primarily via the arms pumping, with reduced movement of the spine and ribcage. Hands often move around upper waist and lower sternum, and often quite far out to the sides. Center of gravity is low and upper spine is stiff, and this often results in upright running.

Sonia Samuels (in the black sleeves) is the main runner in the elite field (men or women) doing this variation, though Dathan Ritzenhein in Boston the week before was another example. There’s a real chicken-and-egg question about whether greater suppleness of the upper spine causes a runner to choose to keep the hands high and close or whether it’s the other way around. In my experience, a runner who’s used to keeping her arms low and wide will not necessarily get that suppleness by pulling their wings in – a deeper learning experience such as Feldenkrais lessons are usually required – yet it will nonetheless help their performance to do so even if it feels awkward. The section of the video this screenshot comes from starts at 39:32. 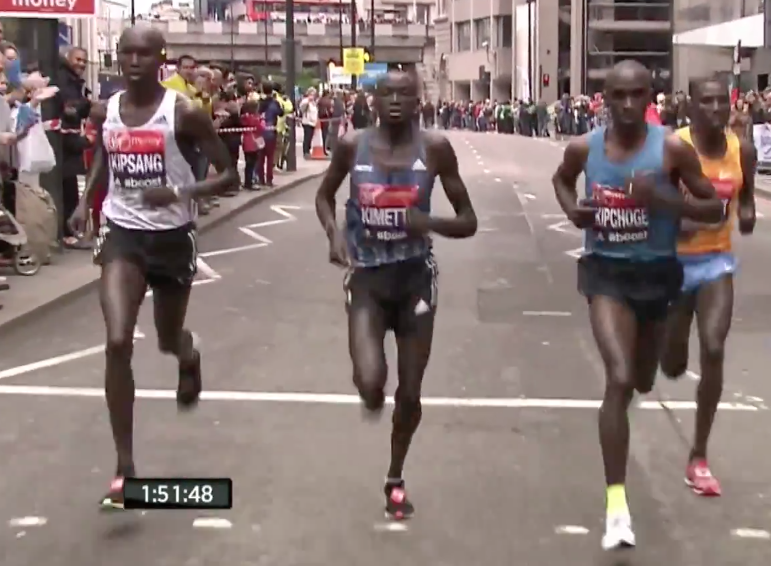 In this style, upper body counterrotation occurs primarily via the shoulders and upper thoracic area, but in a much less differentiated way than the classic Ethiopian or Kenyan versions. In other words, the spine and ribcage above the hands to the base of the neck tends to move more in a block. Center of gravity is fairly compact and quite low though the internally rotated arm action tends to push the shoulders forward, forcing a forward lean though without benefit of a high center of gravity. The pelvis often moves a lot, however, creating a classic “glider” running form with a smooth, easy leg action.

In the screenshot above, you’ll see Wilson Kipsang and Dennis Kimetto running this way (Kipsang’s arms are generally a bit lower than Kimetto’s) while Eliud Kipchoge’s arms are higher. Watch from 1:52:14 to see this.

I didn’t find any women running this way in this race, but Desiree Linden did so in Boston.

In this style, upper body counterrotation occurs primarily in the thoracic spine and ribcage, but it’s restricted by the contraction of muscles in the shoulders and upper back and results in a stride also chopped short. Elbows are usually pulled too close to the sides as the hands are directed forward and back rather than across the body. The tension this creates in the upper back usually pushes the chest up, interfering with the ability to lean.

I was tempted to call this the “bad idea” variation, not only because it’s detrimental but also because people who run that way tend to do so because they’re in the grip of that old mistaken idea that in running all body parts should move only front-to-back, and never crosswise (ie only in the sagittal plane, and definitely never in the transverse). No one actually pulls it off, the shoulders always turn, but making the arms appear to go somewhat forward-and-back even though they’re attached to a framework that’s turning (the upper body) is a lot of extra work.

Coincidentally, the woman and man doing this in the elite field both had the surname Tsegaye, see the picture above. You can see how it causes them to run with shorter, choppier strides, Tirfi at 1:13:00 or from the back at 1:37:15, and Samuel at 36:52.

A Non-Arm Observation: the Pelvis

In these screenshots from roughly 43:17 you can see Michael Shelley, whose running I so admired in the Commonwealth Games Marathon last year, and Scott Overall. Shelley has a much better lean and I believe the reason why is that Overall is tucking his pelvis instead of letting it tilt forward and thus tilt his spine forward. The result is that his head bobs forwards and backwards, as does Mo Farah’s and even, to some extent Sonia Samuels’s. You can see Overall do this at the time noted above and especially well at 2:17:20, and Samuels at 1:46:20.

As an American living in the UK for the past 3 ½ years, I’ve given a lot of thought to the characteristic British style of running, trying to figure out what the central feature is. I’m starting to suspect it’s the tucking, however subtle, of the pelvis. It reduces movement in the transverse plane, stiffens runners and pulls them upright, and causes them to work unnecessarily hard. It’s holding back the British runners in this race, and I’d love to see that change.

This was the great Paula Radcliffe’s last competitive race. I was thrilled to get a good chance to study her form again, and also enjoyed watching a retrospective the BBC made about her career that allowed me to see her characteristic gait even when she was a teenager.

Paula’s accomplishments underscore the fact that running technique is only one arrow in a runner’s quiver, and where strength and psyche are sufficient, technique isn’t the determining factor. (Though who wouldn’t want to add it to their list of assets?)

However, I can’t pass up what’s likely my last chance to give you my take on how her form works for her. It’s pretty clear to me that she essentially has the characteristic British running style as I outlined above. Her distinctive head bob mirrors exactly the movement of her right arm and helps her use her left leg, nodding down and to the left as the left leg swings forward, and up and to the right as she pushes off the left. I would guess she has less differentiation (ie range of motion) in her left hip joint, so the force she generates with her head and right arm help her get the most out of it. That’s just a guess, though, because while I can see what a runner is doing, I never know for sure why they’re doing it until I feel how they organize themselves with my hands.

Having started this post with praise for Mary Keitany, one of my favorite runners, I now conclude it by embracing a new favorite: Eliud Kipchoge, who won the men’s race. I highly recommend you watch the last 10 minutes, from 1:59:28. It’s spellbinding watching him continually subtly alter his technique, testing Kipsang and finding more speed by changing his movement. Kipsang doesn’t appear to have this ability, maintaining the exact same form all the way through the finish. It really speaks to the benefits of versatility as a runner, as Kipchoge is an accomplished track athlete used to competing at varying speeds whereas Kipsang is purely a marathoner (albeit twice the world record holder). Kipchoge opens his hands and directs his arms more sagitally as he approaches the finish, which I doubt helps him at the non-sprinting speed he’s running, but fortunately doesn’t seem to much hinder him either. He’s a joy to watch.