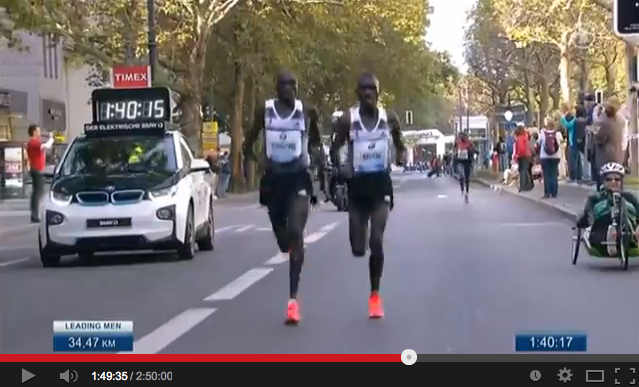 I’m working on this blog post in my favorite Scottish pub, surrounded by people whose eyes are glued to the Ryder Cup on TV. I often feel like I inhabit a parallel universe to those around me but this is an unusually stark example.

Well, to each their own sports preference, and onward with my analysis of the 2014 Berlin Marathon! Whether you’re a beginning runner or an elite, this race offered plenty of interesting running to learn from.

The headline event of the day — Dennis Kimetto and Emmanuel Mutai breaking the world record, with Kimetto setting a new record of 2:02:57 — offers a very interesting example since at a glance their running form is virtually indistinguishable. However, there is a subtle but significant difference between them, and it’s one that you have probably had to deal with at some point when buying running shoes.

There were plenty of opportunities to see them run side by side and compare their form. All of the basic elements of healthy running form were there. But to see the fundamental – in fact, probably congenital – difference between them, take a look at their legs and their chests in the video below, from 1:49:14 through about 1:50:39. Kimetto and Mutai appear after a few seconds, seen from behind, running side by side in matching light colored vests and black shorts. Kimetto is the larger of the two.

First, if you’re quick, you can see from behind that their legs move differently. Mutai’s feet spring up higher and point in a different direction than Kimetto’s: at the apogee of their upward movement Mutai’s toes point out and Kimetto’s point in. The difference is most pronounced in their left feet.

This may seem small but it’s very significant. If everything is moving easily, a runner’s toes point inwards in the air following toe-off, since the whole leg is internally rotated relative to the pelvis (which is turned towards it). This is one of those things that looks really weird in a still photo of a fast-moving elite — they appear to be momentarily dragging a lifeless leg. It’s normal and healthy, though, indicating that the foot, lower leg, upper leg, and pelvis are working in coordination.

I’m not exactly sure what happens muscularly when a runner does the opposite of this, since the muscles don’t actively create the joint motions in running that they would if you did those joint motions standing still. However, the whole chain of relationships from foot to pelvis is altered so that the movement of the pelvis is restricted. And when the leg swings through and approaches the ground, it’s slightly internally rotated, stiffening the foot at footstrike. This is classic underpronation, and Mutai does it.

Just a quick review here: pronation isn’t bad, it’s good and necessary, part of the body’s shock-absorption and elastic return system. If something interferes with your ability to pronate, or turn your arch inwards and downwards, you have to absorb that impact elsewhere in your body. That can lead to injury and it makes running more work.

Overpronation used to be blamed for practically every running injury, and it was what motion-control/stability shoes and often orthotics have been intended to correct. But in fact unless you’re landing far back on your heel it’s not something you need to worry about, and any problems that supposedly stem from your over-pronation should be addressed by strengthening your hips and improving the action of your core, not putting something hard underneath your arch.

Underpronation, on the other hand, means a hard landing, an excessive braking force. What clued me into all of this and made me look at Kimetto and Mutai’s legs from behind was the sense that Mutai was hitting the ground harder than Kimetto. I thought he might be bouncing up and down more as well but when I looked closely I didn’t see it — just an extra jolt. Then I noticed what you can see from the front when the two are side-by-side — that Mutai’s thighs are turned slightly more inward.  And then if you look at 1:49:48 you see a close-up of their lower legs and feet from the front, and, voila, there are Mutai’s feet hitting the ground apparently exactly parallel, right down the middle, while Kimetto’s are turned slightly outwards.

When I work with clients I most often find a person has one foot that underpronates while the other overpronates, and invariably they identify the underpronating foot as the “good” foot. But a healthy footstrike doesn’t mean your weight travels straight down the middle of your foot, it’s a zig-zag from the ball of your little toe, to generalized weight including the heel, to the big toe. That’s a foot that absorbs impact and turns it into energy for the next step. And as we can see here, it’s not just the foot we’re talking about — the movement pattern of overpronation is one that includes the legs, pelvis, and the upper body as well. Note Mutai turns his shoulders more than Kimetto, perhaps to make up for turning his pelvis less.

If you underpronate — on one side or both — the key to learning how to allow a bit of healthy pronation is understanding that the movement pattern involves your whole body, and particularly involves learning to turn your pelvis while standing, with one hip joint rotating externally and the other rotating internally.

Did the fact that Mutai was losing a bit more momentum than Kimetto with each footstrike make the difference in who won and set the new world record? Given how today’s race unfolded, it well might have. However as we know from examples too numerous to list, the best form doesn’t necessarily win the race, it’s just one of the factors that contribute to performance.

The women’s race illustrates that very point, with interesting running form glitches by both Shalane Flanagan and Tirfi Tsegeye, leaving us with an outcome that we certainly cannot ascribe to form. For more about that, check back here next Sunday. And after that, I promise I’ll get back to part two of my post on leaning!

Went on your course in forres. These posts are pure gold. Thanks!

Thanks, Marino! I promise that post is coming, and I even realized that I can fold some of my observations from Berlin into it as well.

Interesting analysis, but I have to question the assertion that Kimetto’s form somehow got him the win over Mutai (and his form). Looking at the video as was recommended, it is Mutai who seems to have the “better” form (at least aesthetically). He has the classic “track” stride, and is able to maintain that very elastic and dynamic form right to the end of the race. In the “track” stride, there is no slouching at any part of the body: everything is supple, supporte, and moving forward.

IMHO, the reason Mutai “lost” (hesitate to use that word, as he broke the existing WR, as well) was because of other things, like nutrition and energy (yes, I know form has an impact on energy) where Mutai was sick and nauseated after the race, while Kimetto was far less distressed.

Thanks for your comment, Andrew. I agree that there are a multitude of factors that determine performance, and on a different day with any of those other factors (such as nutrition) being different I have no trouble imagining Mutai beating Kimetto. I didn’t set out to discover a biomechanical explanation for Kimetto’s win; I have been doing this long enough to know that’s a ridiculous enterprise. I just looked at them running side by side and was struck by the difference in braking force in the absence of practically any other difference, and that made me look deeper. Whether Mutai’s form is “classic” or not doesn’t help us understand why there is a much greater visible jolt in his body than in Kimetto’s with every footstrike. I’m not criticizing Mutai, his form is indeed beautiful, he ran an amazing race, and in fact it seems outrageous that he should have broken the previous world record without having the claim to the new one. But the way he organizes his hips, knees, ankles, and arches creates greater impact and places him at a mechanical disadvantage to Kimetto, and that’s surprisingly relevant to the outcome of the race, don’t you think? And what’s more, it helps me invite my readers such as yourself to re-examine their own beliefs about running form and the role of pronation.