How to Run on Ice (and avoid blisters in heat!)

A couple of weeks ago this article from the Guardian came to my attention. It explains that German doctors are advising people to walk like penguins to avoid slipping on ice. This image shows how it works pretty clearly, even if you don’t speak German: 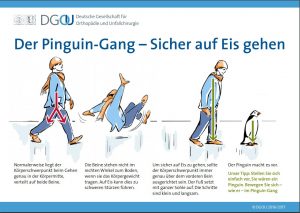 The idea is that if you walk like humans normally walk, you’ll be putting your foot down in front of you and dividing your weight between your two legs, and on ice this can lead to falls. However if you organize yourself so that all of your weight is over your front foot, as penguins do, you’re less likely to slip.

It’s actually pretty sound advice, though I would advise against hunching yourself and waddling side-to-side. That would be taking it too far.

Of course if you’re eight, the idea of walking like a penguin is delightful. My son read the article over my shoulder and the next icy day he coached all his friends in penguin walking. When I picked him up from school he reported to me that everyone felt it worked quite well.

Anyway, this is immediately applicable for running since in running you never divide your weight between your two legs, you only ever have one on the ground at a time. And the forward lean required for good running (even though it’s not normally a part of good walking for humans) further helps you put your weight right over your front foot. So in a way, you’re already moving like a penguin.

However it’s the fine-tuning of your footstrike, weight shift, and toe-off that really matter when you run on ice. Perhaps you’ve seen video of Nicholai Romanov, the creator of the Pose Technique, running on an ice rink:

The commentary below the video stresses the importance of landing on the ball of the foot under the center of mass and pulling the feet up from the ground. Elsewhere Pose enthusiasts suggest that this feat of running on smooth ice particularly demonstrates that there is no push-off in running.

None of that is exactly right, and I’m not recommending you run like this. Trying to land with your foot already under your center of mass is problematic, it means your footstrike is your mid stance, which is nearly impossible. I explain that in-depth here.

What actually matters here is not that your foot be exactly under you when you land on it, but that there be little or no shear when the foot is touching the ice. This was explained to me by a client of mine who is an expert in traction, and who consults to tire companies on how to get traction in icy and wet conditions.

What makes ice slippery isn’t the ice itself, she explained, but a thin layer of water between you and it. Friction melts the ice to create this layer of water — this is what makes skis and skates slide.

If you want to run as safely as possible on ice, your foot needs to drop straight down onto the ice without even the tiniest bit of shear in any direction. This way you don’t create the friction that would melt a little ice and make the surface slippery. Ditto when you shift your weight onto that foot, and then off it again at toe-off.

If you’ve done this successfully, you can have enough traction to push yourself forward and up, as running requires, without your foot slipping backwards.

Whatever Romanov or others say about what’s required to run on ice, this is what actually makes it work.

I can’t promise this will be enough to let you run safely over all ice, which often is bumpy and uneven. And proper equipment to minimize sliding is a good idea, there’s plenty of advice about that on the internet.

But this is the technique side of things, and it’s safe to say that when you can organize yourself to drop your foot straight down without having it scuff or slide, even the normally imperceptible amounts runners often do, you’re in good shape to run on practically any terrain you want.

As I’ve said elsewhere, you can’t micromanage your footstrike when you run, so if you want to get better at this you’ll need to work on your core action. This lesson will help with that and should help you reduce the friction in your footstrike so you get better traction on icy surfaces… and avoid blisters in the hot weather too!

I saw your walking on ice article and wanted to read it again but I couldn’t access it. I liked the graphic with the man and penguin walking. I am a Feldy from Canada and appreciate your website.

Looks like this article didn’t upload properly, would love to read it though

Hi Lisa and Susan, my website was hacked last week and this post was vandalized, but it’s back up and readable now.