How to Fix Your Hip Flexors

Maybe they’re tight, maybe you’ve got a pull or strain, maybe they get really sore. Or maybe they don’t bother you at all but you’ve been told they’re the source of another problem such as back pain or plantar fasciitis. Whatever’s got you looking to solve a hip flexor problem, there’s something important you need to know.

How Your Hip Flexors Work

The main muscles that flex your hip joints are your iliopsoas, rectus femoris, sartorius, and tensor fasciae latae. In the context of running we think of their job as bringing the knee forward and up, which means we think of them working in the sagittal plane (the front-to-back plane of motion). In this view, hip flexion happens when your thigh comes up directly in front of your hip joint and hip extension—the official anatomical term is actually hip hyperextension—happens when your thigh moves directly behind your hip joint.

This results in people doing stretches like this for the hip flexors:

But there’s a problem with this view, and it’s a problem that will keep your hip flexors an issue even after you’ve done a lot of work on them.

But in running your pelvis and spine don’t stay perfectly still. Also, you only contract one side at a time since your legs are moving opposite each other. When you contract just one side of the iliopsoas, you not only flex the hip joint, you also lift that side of your pelvis. And at the same time, as the other leg moves underneath and behind you, the iliopsoas lengthens, allowing that side of the hip joint to tilt downwards and the leg to move behind the pelvis.

A full contraction of the iliopsoas on one side moves your pelvis and spine as well as your leg. A full lengthening of it does the same in the other direction.

So thinking of your hip joints as hinges and doing exercise and movement based on that image doesn’t match either the anatomical reality or the movements you do when you run, and you’ll have limited success and a lot of extra stress from any exercises you do that work on that model.

When you move your legs in running your pelvis is also moving, and the structure of your hip flexors are part of this system.

This means that as a runner’s leg passes behind them and their hip joint extends, that side of their pelvis moves down and backwards.

And as a runner’s leg comes in front of them and their hip joint flexes, that side of their pelvis moves up and forwards.

For an image of how this works, check out this video I made of myself in a gait lab a year and a half ago.

If you think of hip extension as happening just in your hip joint and try to, for example, push that side of your pelvis forwards as the thigh passes backwards in order to maximize the movement in your hip joint specifically, you’re actually interfering with your hip extension by making your pelvis move the opposite direction that it should. Your ilipsoas on that side can’t properly lengthen, and that reduces how far back your leg can go.

And ditto if you try to maximize your hip flexion by pulling that side of your pelvis backwards as your knee moves forwards and up. You are preventing your hip flexors from properly shortening (and this is a perfect recipe for hamstring problems, by the way).

This goes for the action of running and also for exercises or stretches you do for your hip flexors. It’s popular in fitness right now to take a super-mechanical isolated view of actions and muscles. So people consider any movement of the pelvis in hip flexor stretches or strengthening to be “cheating.”

It isn’t. It’s just your body trying to work right.

When you do movements or exercises that involve hip extension (or hyperextension if you prefer), let that side of your pelvis shift appropriately slightly down and back.

And when you bring your leg in front of you, let that side of your pelvis shift up and forward slightly to facilitate it.

The harm that so much sitting does to the hip joints isn’t only that the actual femurs rest in the hip sockets in flexion for untold hours each day, but also that the pelvis is held level and square. We’re now aware of the hip joint part of this is a problem, but the level, static, passive pelvis has not yet been recognized for the companion problem it is…and too often is put forward as the solution instead!

After all the most stable pelvis of all is the one that’s in the seat of a chair.

When you move your pelvis moves. When your hip joints go through a range of motion, so does your pelvis. And when you allow this to happen, the reduction in tension you’ll feel around your hips will help your running in the way you’ve been seeking.

Here are my best Feldenkrais lessons for learning to extend your hips better. Click on the image to get them! 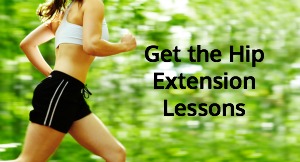 Interesting Jan, I am on board. Can you give me some examples of the exercises.
Also, what about the role of the glutes in the hip exercises and in the running stride?
Thanks

Great, thought provoking article. Would be helpful if you could expand on what exercises you recommend for hip flexors.

Hi John. Honestly, you could do any hip extension exercise you can think of and just allow your pelvis to move naturally as a part of that exercise, and you’ll be on the right track. Bird dogs done this way are a favorite of mine.

As always, Jae, enlightening and valuable! Thanks so much.

Definitely an interesting article. It would be great to learn about what exercises you recommend that are hip-extending activities that include the movement of your pelvis in the action of your legs. One exercise that comes to my mind, but I have no idea if it fully meets your criteria, is flutter kick in a swimming pool – either on one’s stomach, side, or back – what do you think? What about dolphin (butterfly) kick in the swimming pool – then both legs move at one but the hips are definitely involved and so I think the pelvis is, too.

Hi Catherine, yes, a flutter kick definitely qualifies. That’s just one of the many reasons swimming is such a great cross-training activity for runners. Not sure about a dolphin kick–to be honest I never learned to do that myself so I haven’t tested it out. Generally speaking, though, you get a good carryover to running when the two sides of the body are working in alternation, and a poor carryover when they are working simultaneously. So a flutter kick should be more functional for a runner.

One exercise I recommend, and I’ve been meaning to make a video of it, is the bird-dog, but allowing your pelvis to move as you do it rather than trying to keep it level (as the exercise is usually taught).

I agree about pelvic rotation allowing the psoas to recover a leg forward, but I think you are mistaken in writing that it is the psoas muscles that are involved in pelvic rotation and tilt. I believe that rotation of the pelvis is initiated by spinal and trunk muscles, and that the gluteus medius assist in pelvic tilt, so the extending leg helps to lift the opposite side of the pelvis, etc.

Hi Lawrence, thanks for your comment. I think you’ve missed the point, however. It’s not so much a question of what the psoas acts to do, but how it fits into relationship with the actual movements of gait–running but also walking–in which the legs work opposite each other and the pelvis moves. For that, it’s critical that you don’t think of hip extension as a purely sagittal activity. Regarding the involvement of the psoas in movement of the pelvis in the frontal plane, have a look at this: https://learnmuscles.com/blog/2017/08/17/psoas-major-function-6-spinal-joint-actions-frontal-transverse-planes/ . Regarding the transverse plane involvement, I don’t believe I wrote that the psoas actually *does* that but it doesn’t much matter whether it does or not for our purposes since involvement with lateral flexion in gait means rotation of the pelvis in the transverse plane is also created, and anyway the psoas is shortened on the swing leg side at that moment whether or not it’s active.

Hi Ali, those are good questions. Though I haven’t written about that specifically, I think you’ll find the videos in this blog post clarifying. Generally speaking, pelvis movement in the right amount will encourage upper body movement also in the right amount, and vice versa. However it is also possible to have movement habits that interfere with that, so it’s not a guaranteed thing. https://www.balancedrunner.com/the-balanced-runner-keys-series-get-your-core-in-action/

When I sprint there is a knot that forms in my right gluteus. Each time my foot lands there is pain. Upon massaging the knot there is some relief. Occasionally my pelvis gets tilted and my hamstrings get tight. What suggestions do you have for stretching exercises and conditioning to strengthen the hip flexors?