When Mo Farah is out on training runs he says people sometimes shout at him, “Run, Forrest, run!” Not, I think, because of any particular resemblance but because the movie Forrest Gump is still such a widely-shared touchstone for distance running.

For us runners it touches on our deepest motivations, the things that take us out the door day after day and also make us turn to running in our moments of greatest need.

Believe it or not, the movie also offers some interesting insights into running technique. Take a look at the famous long run scene:

Bad Shoes and an Insufficient Warmup

Let’s begin at the start of this clip. It’s not easy, as you know, to simply stand up after sitting a long time and take off running as fast as you can. Add to that the additional difficulty of the narrow toebox on Forrest’s shoes (which makes me cringe).

Having your toes squeezed together keeps you from being able to move your weight easily onto your forefeet, which need to spread in response. Consequently your nervous system, feeling a barrier, will simply not move your weight as far forward and you’ll end up running with a shortened stride.

Something like this happens when Forrest starts to run. You can see in his first few walking steps and the start of his run that his ankles remain dorsiflexed so his stride is choppy and short. 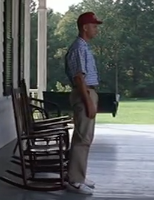 This tends to happen anyway immediately after sitting a long time: the pelvis initially remains square and level and the hip joints and ankle joints initially remain at least a little flexed. Normally I would consider hip joint flexion the more significant element, but in this case when Forrest stands his pelvis is pushed forward but not tilted forward (anteriorly), suggesting his hip flexors are, if anything, overly lengthened. So I think it’s the ankles and feet that are responsible for his stride at the outset. 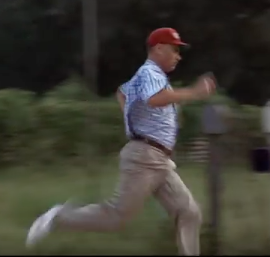 When you can’t easily move to the fronts of your feet  through late stance, you generally end up running as if your hip flexors were not lengthening, and we see this as Forrest rounds the corner and runs past the mailboxes at the bottom of his driveway. His upper body and head are pulled back, his chest and belly push forward. That’s what running with shortened hip flexors and/or dorsiflexed ankles looks like. 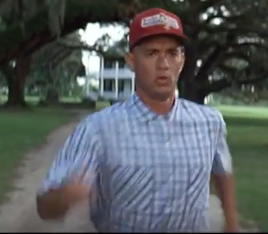 His arms are also a factor as he runs down the driveway and turns onto the street. He’s swinging them basically front-to-back without allowing his hands to cross into the space in front of his chest. This requires excess tension in the shoulders and back, matching up perfectly with the the chest-and-belly-forward form he’s using because of the feet.  This arm action prevents the side-to-side weight shift that allows a runner to get good leverage with each foot. As a result his feet land in a line, as if on a tightrope.

Starting to Loosen Up 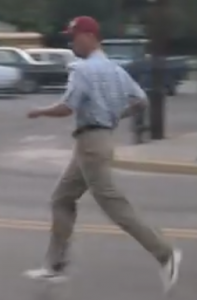 By the time Forrest reaches the main street and we see him through the barbershop window he’s looking a little better. He’s not pushing so hard, his ankles are more relaxed and extending (plantarflexing) in the air, he’s starting to lean forward, and his chest and belly are no longer pushed forward.

This relaxation also means he’s dropped his arms, however, and that’s sub-optimal. His elbows are now bent a lot less than before and his palms, especially left, point to the ground rather than inward. This lack of compactness in his organization requires extra energy to run.

His head is also a bit too far forward, which isn’t so surprising because throughout the movie the character has tended to have his head a little down, flattening the curve that we should see in the back of his neck and even rounding his upper back at times. You would do that too if people frequently treated you as if you were dumb. It’s impossible to separate your running technique from the way you move in your life.

As we see Forrest run down the next country road we can see still more rhythm and organization in his arms, which have taken on the classic “windshield wiper” action of forearms and hands swinging widely side-to-side. This arm action out in front of his body counterbalances his rounded upper back—to stop doing either he’d have to stop doing both—but the rhythm is working for him.

We can also see that, as a benefit of having a somewhat more natural arm action, his feet are no longer falling one directly in front of another as if on a tight rope. This allows for much more use of the elastic properties of his body, with the sides of his body alternately lengthening and shortening, twisting and untwisting. This is going to be critical for him to be able to run back and forth across the country a couple of times, as he is about to do. (Sorry, I probably should have give you a spoiler alert there.)

As we see him from behind in this scene we can see he swings his left hand very low and wide while keeping his right in front of him. This pattern will only get stronger for the rest of his run.

Why? Well, as is generally true with these patterns, the movie shows us that Forrest did this even as a child.

One of the great things about writing this analysis is that running technique is part of the character and carries through the three actors we see play him—the child who played Forrest as a boy, Tom Hanks for most of the movie, and Tom’s brother Jim Hanks who doubled for him in some of the long run scenes. (Apparently they couldn’t find another actor who could accurately copy Tom Hanks’s running style, so they turned to family. And isn’t that interesting!) For that reason I’m writing about Forrest Gump’s running technique as if he were a single person.

So we don’t know for sure why Forrest’s left arm swings wide and low, but it seems to have something to do with his childhood scoliosis which was corrected through leg braces. “My legs were right as rain but my back was as crooked as a question mark,” he says.

Take a look at this scene, in which we see him begin to run in his leg braces, then (spoiler alert!) break out of them and really run.

Attempting to run before the braces break off he leans right slightly and his gait has an uneven rhythm, with longer steps when the right leg swings forward than when the left does. The left leg circles out and around more than the right. This is consistent with a left side organized for stability, with a stiffer leg that feels longer, and a right side organized for action. This is a pattern that affects all of us to some extent.

In the thrilling moment when the braces fall from his legs and his knees can bend, look how his pelvis also begins to move more dynamically. On the one hand, having legs that couldn’t bend much required him to depend on pelvis movement when he walked, but on the other hand the drag of his straight legs—and worse, the feet that were held in dorsiflexion—caused a huge amount of rigidity and effort in his torso. Stand up and try it yourself to feel what I mean.

All of that falls away when the braces do. This is a liberation as visceral as can be.

However notice his ankles still are quite dorsiflexed so he seems almost to stomp with each footstrike. As we saw, this habit will stay with him to some extent for the rest of his life.

As he turns and races off into the field, you can see his left arm swinging outwards, the only remaining visible element of the asymmetrical movement pattern we saw in his braced-leg walking.

Running in the Army

His time in the army likely didn’t help either, as I can attest from having clients in the military. Take a look at this clip of Forrest running with a rifle in his hands and you get an idea why.

When holding a rifle, the right arm is able to move in a way that’s not too different from how it would optimally move without the gun. But the left hand and arm are turned a different direction and move in a way that’s quite unnatural for running. Soldiers train to run with their guns and this ingrains habits that carry through to the running they do empty-handed as well.

This has a knock-on effect on the legs that is entirely consistent with the movement pattern we saw in Forrest’s childhood: it becomes especially easy to move the right side, especially tricky to move the left. This shows up most clearly of all at the end of Forrest’s epic long run.

The End of the Run 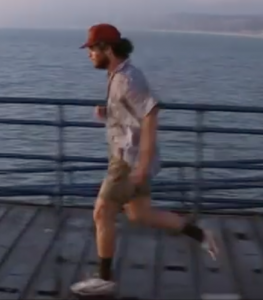 Before we go all the way to the end, take a sec to appreciate Forrest’s economical ultra-runner form that develops as his run continues. His right hand and forearm stay very close to his chest, and his left arm mimics this organization when he’s looking his best (in the Nike t-shirt). His upper body is turning and his head is shifting side-to side with a brisk and steady rhythm and his chest is relaxed. His feet are falling in line with his hip joints.

As he grows fatigued close to the end his left arm drops considerably, his upper back rounds again, and his footsteps look shuffling and choppy (he’s not moving onto his forefeet again, as at the beginning).

When he stops, turns around, and takes his first couple of walking steps, you can see that his left leg is very stiff and he doesn’t quite get his weight onto it, echoing what we saw in the leg brace scene. This makes very clear the function of his left armswing—the wide movement means he’s able to balance in stance on his left leg without moving his trunk to the left as he should. It stays center/right. This prevents the left leg from working correctly, and as he walks we can see that without swinging his left arm out to the left he can’t actually balance on the left leg at all.

I see this sort of thing all the time, and when it gets as bad as it looks in that scene, people usually do want to stop running.

This long run scene is a little jewel. Tom Hanks said the remarkable thing about the film is that it broke all the story-driven rules of filmmaking, but to runners this scene is a story—a very familiar story of why we need to run in life’s harder moments. It has an arc we all know intimately.

Forrest’s first run as a child when he broke free of his braces tells another story we all know about running: how it lets us break free in body and mind from everything that binds us.

And Forrest’s Medal of Honor-winning run to save his comrades in Vietnam (oops, accidental spoiler) demonstrates another force that drives us to grow as runners—what Christopher McDougall described at length in Natural Born Heroes as the desire to be useful.

Altogether, this makes Forrest Gump one of the greatest running movies of all time. If you’re looking for some relaxation over the holidays—and you’ve already gone for a run that day—I highly recommend you watch it again.

And that’s all I have to say about that. 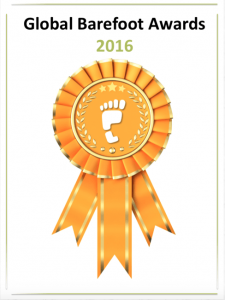 The Global Barefoot Awards are still afoot, and I’m currently second behind Paul Chek as “most influential minimalist/barefoot educator.”

With your vote I can win! Please vote for “Jae Grunke” under question #4 and spread the word!