Footstrike, armswing, how they won and why they didn’t–here’s the running form version of the 2019 Boston Marathon story.

Worknesh Degefa, women’s winner in Boston, has a powerful style despite the quirks of her armswing. Check out this video of her finish:

From the front you can see that her elbows are bent enough to bring her hands high on her sternum at the forward swing. At the same time, it looks like she swings them wide around herself rather than keeping her hands close to her torso—similar to how many people lift their arms out to the side to run downhill on a trail.

However from the side you can see her pronounced forward lean—something not possible if the hands are far out in front of the chest. Any gap between hands and chest pushes the chest (or rather, the whole torso) backwards, interfering with the ability to lean forward. Despite the pixellated video quality, her hands appear to be quite close to her chest, and her lean indicates this also must be true.

I think one reason that from the front her hands seem to be so briefly in front of her and so quickly whip out to the sides is that she uses a lot of upper body rotation and less lateral flexion (side-shifting) than many runners.

Her feet and legs are organized for easy and powerful internal hip joint rotation, giving her a long stride length and plenty of power in late stance, and I think it’s this rotation of her upper body (particularly in her arms) that she depends on to turn this into smooth forward movement. Otherwise she would be at risk of excessive vertical oscillation—being too bouncy, in other words.

From the side you can also see that her stride is not symmetrical. It seems she has shorter ground contact with her left foot, and this matches up with her quirky left arm swing, which is something like what you’d do if you were barefoot and stepped on something prickly with the left foot. You’d use your arm movement to briefly suspend your weight and help you quickly get off the foot. Whether this reflects a previous injury, presages one, or just shows a vulnerability to an injury that hopefully will never materialize I don’t know.

I’ve had the happy opportunity to study second-place winner Edna Kiplagat’s form many times over the years, and this didn’t seem to be her best race in that regard. All the basics were there: forward lean, gazelle-like leg action, hands close to heart on the forward swing. But her back was actually fairly arched and she seemed to dance lightly forward on her turned-out forefeet. The agility I remember from 2017 is there, but the combination of arched back and forefoot emphasis usually indicates that the runner’s hip flexors are tight. She’s always had a tendency to a slightly arched back, but here it seemed more pronounced than usual.

Kiplagat also had a significant amount of black kinesiotape on the left side of both legs, and her narrow and slightly rightward-turned gait probably reflects whatever difficulty the tape was meant to support. So perhaps that also accounts for a less sparkling form than usual. I’m sorry I don’t have any screenshots or video clips for you—NBC has been unconscionably stingy with their footage, and there’s nothing on YouTube. My own screenshots are too unclear to be usable. 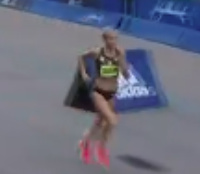 ve had even more opportunity to study third-place Jordan Hasay’s form, since I’ve had the pleasure of working with her on it on and off since she ran Boston in 2017. The goal has been for her to use the same overall technique that her East African competitors use. That’s involved making it possible and natural for her to lean forward, finding a new groove for her arms, learning a different way of moving her pelvis, and balancing her hip flexors and glutes.

I do have a few small screenshots of her approaching the finish line. Despite the small size and low resolution of the images, you can see the progress. It was great to see her back and running so well!

Read what I wrote about her form in Boston in 2017 here. I’ll blog more about what that process involved in a few weeks.

Much has already been said about the exciting finish to the men’s race—how Lawrence Cherono outkicked Lelisa Desisa to win by 2 seconds, with Kenneth Kipkemoi just a few more seconds behind.

I don’t have anything in particular to say about the overall form of the three men, as Cherono and Kipkemoi had generally clean form and I’ve written about Desisa’s form already a number of times.

But what was really interesting was what they all did with the finish line in sight and all of them in contention. Racing down Boyleston Street, each man did something different with his arms to try to find more speed. Have a look:

Kipkemoi stretched his hands open like a sprinter but kept his arm action fairly unchanged. This does nothing for speed but it does take a little extra energy. Nonetheless a number distance runners do it as they approach the finish line, including (to my everlasting frustration) Mary Keitany and Eliud Kipchoge.

Both Desisa and Cherono, in the final seconds, went to their arms for speed, with very different results.

Desisa pumped his arms in an ever larger version of his normal armswing, which carried his arms ever wider out to the sides. After making an impulsive grab as if to hold Cherono back, his arms begin extending so wide to the sides that he barely seems to get his hands in front of him on the forward swing, and takes the last few steps with his arms almost entirely out to the sides.

Cherono extended his arms in a similar way but was able to keep bringing them in front of him—with hands open if floppy—in a sprinter’s action as he took his final steps to victory.

Why did Desisa give up a few steps from the tape?

His ever widening armswing and the buckling of his knees give us the answer: his abs gave out.

As I’ve observed before, Desisa’s psoas overpowers his abs or, to put it more conventionally, he has tight hip flexors. This causes his arched back and lifted chest, and creates varying levels of difficulty for him in different situations. In the Breaking2 Project it was disastrous. But he’s a very accomplished runner who’s won Boston twice and New York once, and podiumed in those races four additional times before this race. Saying mostly he runs just fine despite this problem would be putting it mildly.

Just to be clear, this is the same difficulty I guessed Edna Kiplagat was having. A shortened psoas runs out of play after the pelvis passes the stance foot, at which point it starts to pull the pelvis deeper into a forward tilt, arching the back. The whole spine is actually pulled forward, but to keep from faceplanting the runner instinctively contracts their back muscles to pull their upper body and shoulders back, and the result is an arched back and lifted chest, plus tight back muscles and abdominals that struggle to keep the upper body moving forward.

Most runners with running-related back pain that’s symmetrical across the lower back have some version of this movement pattern. Here are some ways to deal with that.

Under the intense stress of that final kick, Desisa’s abdominals lost the battle. His chest rose and rose, his back arched, his nearly straight arms created even more drag, pulling his upper body backwards, and he was increasingly unable to bring his upper body or arms forward.

Finally he hit the outer limits of his ability to run, his upper body too far back and his abdominal muscles (plus probably pecs, sternocleidomastoids, and more) unable to pull it forward enough to balance over another forward step. Feeling what was about to happen, he stopped running the instant before his knees buckled.

It looks like he just inexplicably gave up when it was still possible for him to win. But he’d been kicking and straining and arching more and more for most of Boyleston Street, and there is simply a limit to how far that can go. Unfortunately for him, that limit was three steps short of the finish line.

Nice analysis especially the notes on the common problem of a turned out forefoot landing tracing back to a tight / overactive psoas. Jordan has been using the LightSpeed Lift Body Weight Support (BWS) device since she resumed running in November. I am interested in your thoughts about using this type of BWS to help train proper form.

Jae, I use ATM also but find that slight assistance in functional upright gait position allows the user to experience and feel the “change” more quickly.

I made a video of Cherono’s running form when he won the Honolulu Marathon in 2016. Hope this can help the discussion.
https://www.youtube.com/watch?v=1LweQWGEgvE

Hi Jae,
You frequently talk about the negative effects of tight hip flexors; do you have any recommendations for what those of us with this issue can do at home to fix it? I have a tight right hip flexor that turns my whole body to that side, cuts off my stride and gives me some back pain.

Hi Stuart. I do have a few free resources which you can find by typing “hip flexor” into the search bar on my website. Though for a more comprehensive solution it would be a good idea to do my online camp (or work 1-to-1 with me if you can). You can find more about that under “Get Our Help” in the menu at the top of the page.